The reverberating chorus of “1812 Overture” fills the halls of the B building, a sign of band students hard at work.

Senior Dylan Tsuruda, who plays trombone in the high school Wind Ensemble, has been a band member for six years. According to Tsuruda, he joined the band in the seventh grade after his parents forced him to. Originally he was assigned to play the baritone. “When I joined band, I had no idea what those weird-looking things called notes were,” said Tsuruda. After playing the baritone for a year and learning how to read notes, Tsuruda discovered the joy of band and decided to continue. He eventually switched from the baritone to the trombone after wanting to try a new instrument.

The most challenging part of band, Tsuruda believes, is transforming music from printed notes on paper to actual sound. “Making music that sounds good isn’t easy,” explained Tsuruda, “especially when that music is classical music because classical music can be really boring.” Despite that, Tsuruda enjoys the camaraderie among the band members. “I think it’s pretty special to create music in a group because music touches people, and to create something with that kind of effect is a neat experience,” he said. 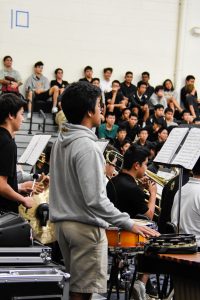 In the seventh grade, junior Mark Pascual, Wind Ensemble percussionist, chose band as an elective because drawing and singing were not his forte.

He was given the important position of percussionist. “When I first started playing, my rhythm was very bad,” said Pascual. Despite the difficulties every first-time musician faces, he decided to continue band after he saw the hours of hard work and practice pay off during the end of the year concert.

“Over the years, I have progressed a lot in music. I can now pick up difficult pieces and play them,” Pascual said. For him, the most challenging part of being in band is the extended periods. During these 85 minute classes, band director Brad Shimizu works out technical issues and the feel of the music. “It’s easy to get lost and tired,” said Pascual. “However, when I mess up [Shimizu] always makes a joke and the class laughs, which makes class fun.” Pascual believes the most important thing to remember about band is to work hard and have fun.

Teachers and Students Weigh in On HBA’s Short Summer