On September 30, students from the Japanese 3, Japanese 4, and AP Japanese classes flew to Japan and explored the food, sights, and language of the beautiful country. The ten-day trip took students to places like Osaka, Kyoto, Tokyo, and Hiroshima.

The first day of the trip was mostly spent traveling on a nine hour plane ride over the Pacific Ocean. Most students slept through the flight while others watched movies to fill up the time. When the plane landed, it was around 7:30 P.M. in Osaka (12:30 A.M. in Honolulu.) Once everyone was accounted for, the group rolled their suitcases over to the shuttle, meeting their guide, Yumi-san. A half an hour later, the group arrived at Hotel Elsereine Osaka and everyone was glad to get a good night’s rest after a long day.

It was only on the second day that the Japan trip truly started. The students got to to explore Nishiki Market and buy their own lunch, learn how to make Japanese confectionery sweets, climb to the top of Fushimi Inari Shrine, and see the beautiful, golden Kinkakuji Temple. The Fushimi Inari Shrine is home to the famous 10,000 torii gates.

On their third day in Japan, the group got to do even more than the previous day. The first stop was at Doshisha Kori High School. There, HBA students took part in a traditional Japanese tea ceremony, learned kanji calligraphy, and made new friends while following assigned Doshisha Kori students to their classes. They also got to enjoy a sumptuous school lunch at the end of the visit.

Senior Niko Lopez said, “I really enjoyed interacting with our sister school Doshisha Kori. My partner and I bonded, as did everyone else, and it was such a wonderful experience joining cultures during that time.” HBA has been visiting the Doshisha Kori High school for over 10 years. In return, the Doshisha Kori students visit HBA annually and participate in a special chapel presentation during their time here. After Doshisha Kori, the group boarded their motor coach for Osaka Aquarium Kaiyukan, stopping at the Osaka Castle en-route to take a picture before the magnificent structure. The Osaka Aquarium Kaiyukan is one of the largest aquariums in the world, with giant tanks that house large marine creatures like whale sharks and manta rays. “I loved seeing the seals and polar bears,” senior Kasen Wong said. “The moon jellyfish were also fascinating and ranged from minuscule sizes to being so large that it can fit in both of your hands.”

Even though the trip only lasted 10 days, the itinerary made sure that students and chaperones had a variety of experiences through exploring the nature, food, animals, people, and culture of Japan. At the Arashiyama Monkey Park, the group got up close to macaque monkeys. The travelers also walked through the Sagano Bamboo Path, where yellow-green bamboo trees stretched far above their heads. The group was also treated to a clear view of Mt. Fuji, which is usually obscured by cloud cover. “I have never seen such a clear, beautiful view of Fuji-san out of all my tour guides with different groups,” Yumi-san had commented when the group stayed at Hotel Mifujien.

The jam-packed schedule meant that highlights from the trip were in abundance. Chemistry teacher Michael Hu said, “For me, it was the Tokyo Digital Art Museum and sitting in the onsen at 5:30 A.M., watching a cloudless Mt. Fuji appear slowly as the sun rose and lit up the mountain.” Junior Jessica Miyasato said, “I enjoyed seeing all the beautiful scenery that Japan had to offer. An example would be when we were walking up the mountain of the Fushimi Inari Shrine. At certain spots up the mountain, there were places to stop and look out at the city below.”

As the trip came to close, many students were reluctant to go home. “It was too short,” Lopez said, before adding on jokingly, “Yoo-sensei, when do we go back to Japan?” On their final day, after packing up their bags at Sunshine City Prince Hotel, the group departed to Tokyo Skytree, which is 2,080 ft high, towering over all of the other buildings in Tokyo. The travelers then briefly stopped at Sensoji, which is Tokyo’s oldest Buddhist temple, founded in AD 628, making the structure roughly 1,373 years old. Around 6:00 P.M., the group finally departed for the Haneda Airport International Terminal to board their flight home to Oahu.

Even though Japanese teacher Elena Yoo grew up in Japan, the trip gave her a new perspective on her home country. “It’s hard to see what the students are seeing with their eyes because I grew up in Japan and I am familiar with everything I see there. But, when I see their photos and what they talk about, I get it. I get what they have never seen before,” she said. 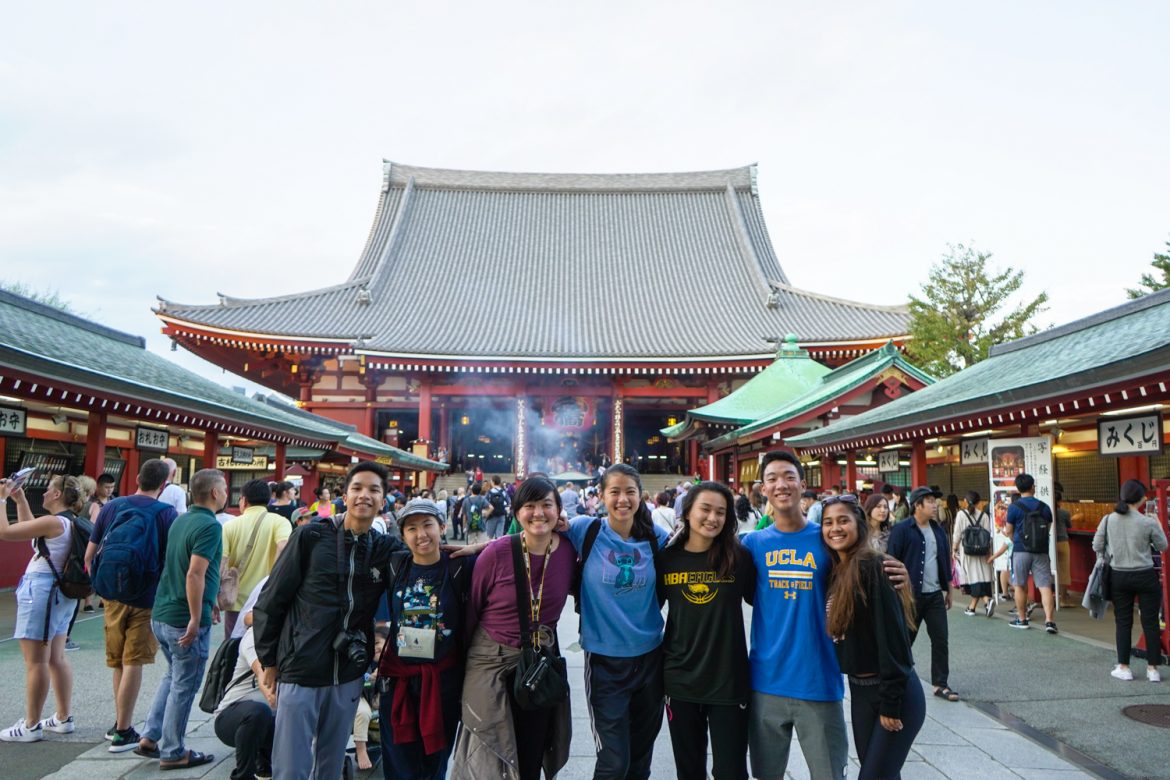 Sensoji TempleSensoji Temple, Tokyo. This temple, the oldest in Japan, was the last stop on the trip before the students boarded their flight back to Hawaii. (Left to right) Seniors Niko Lopez, Caily Okazaki, Jayni Ishikawa, Mikayla Chun, Nicole Arakaki, Kasen Wong, and Justice Stone. Photograph by Timothy Dixon ('20). 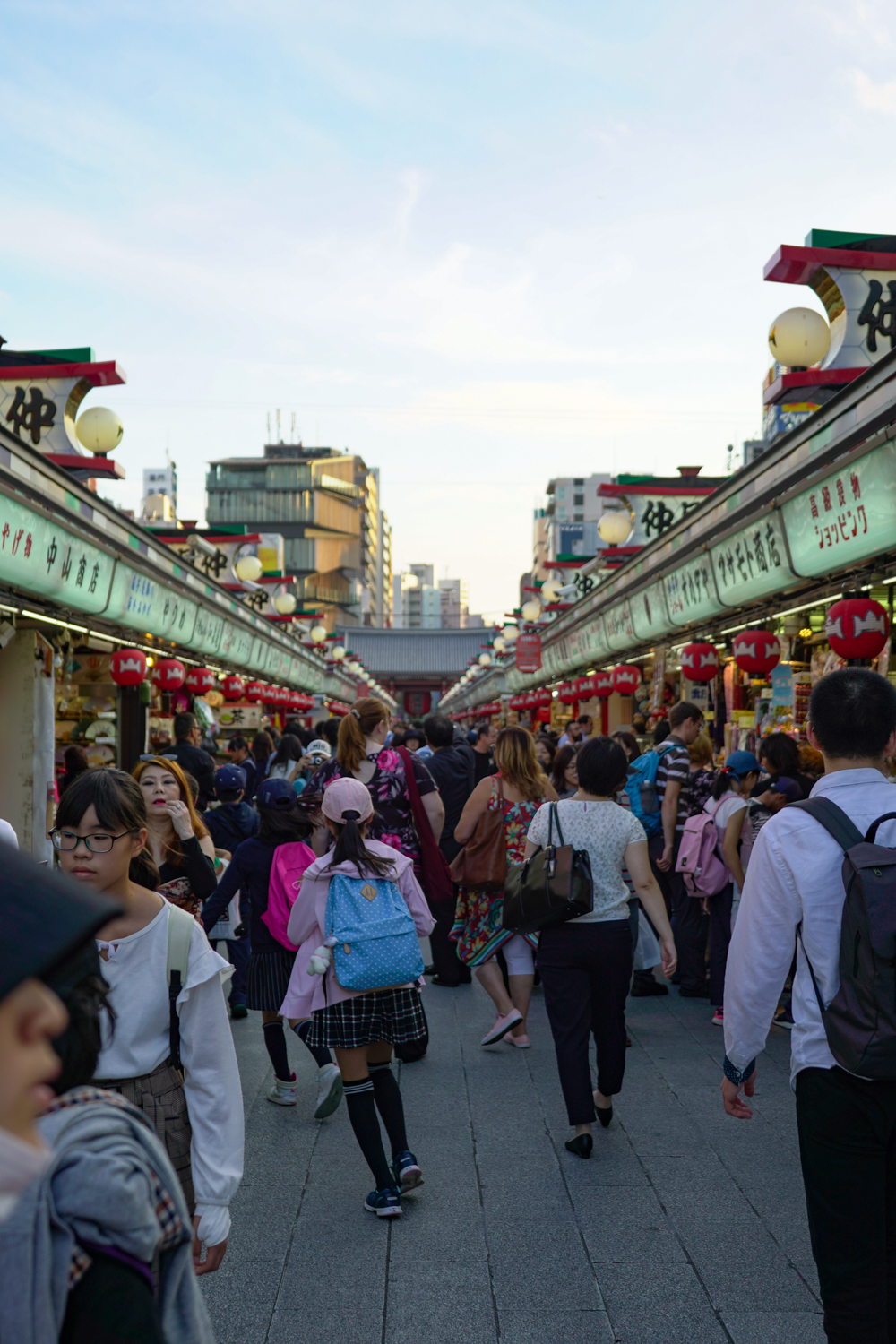 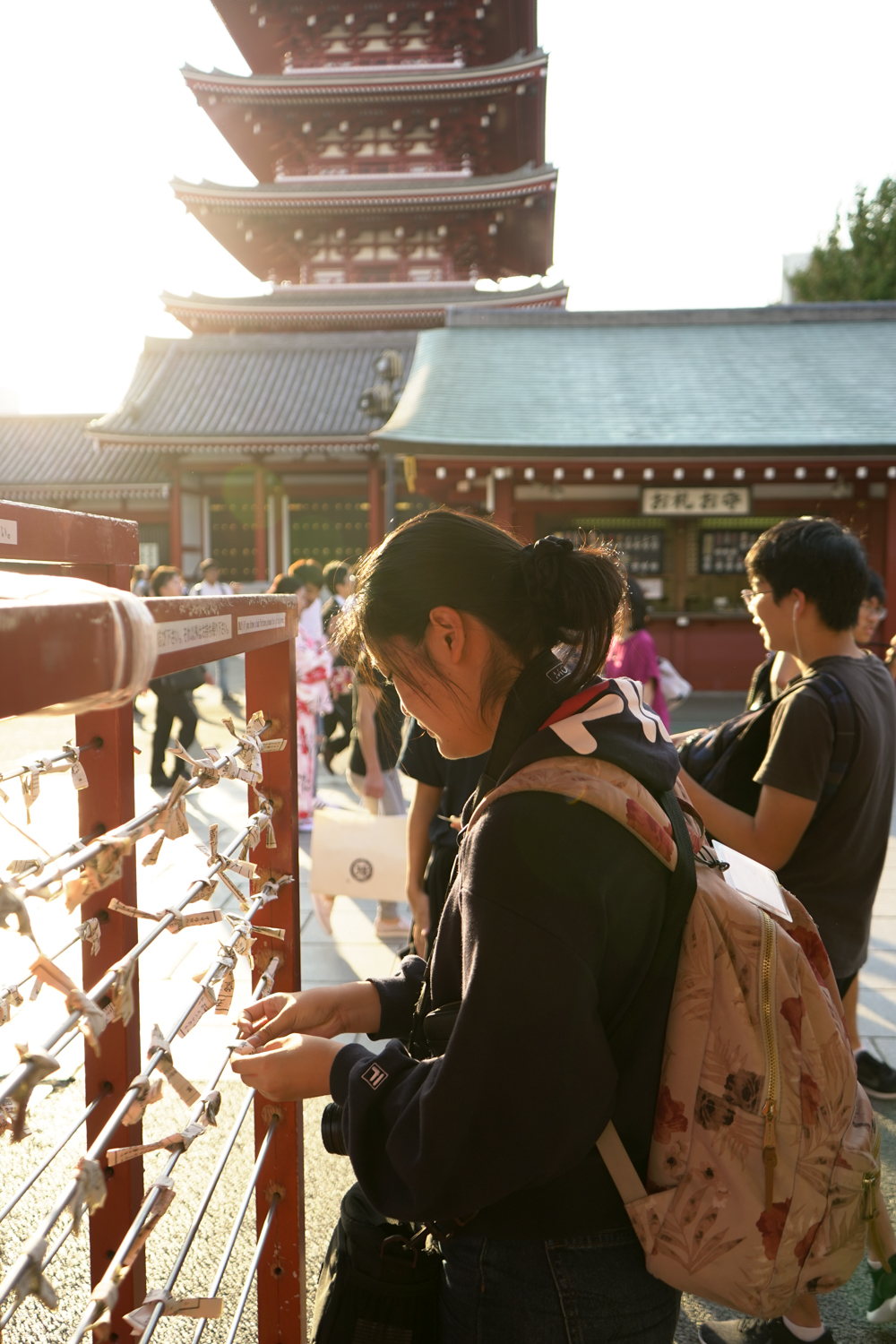 Paper fortunes at SensojiSensoji Temple. Junior Maya Liao ties her omikuji (paper fortune) slip onto an iron rod. Some believe that this practice signifies the sealing of your fate as predicted by your omikuji. Photograph by Timothy Dixon ('20). 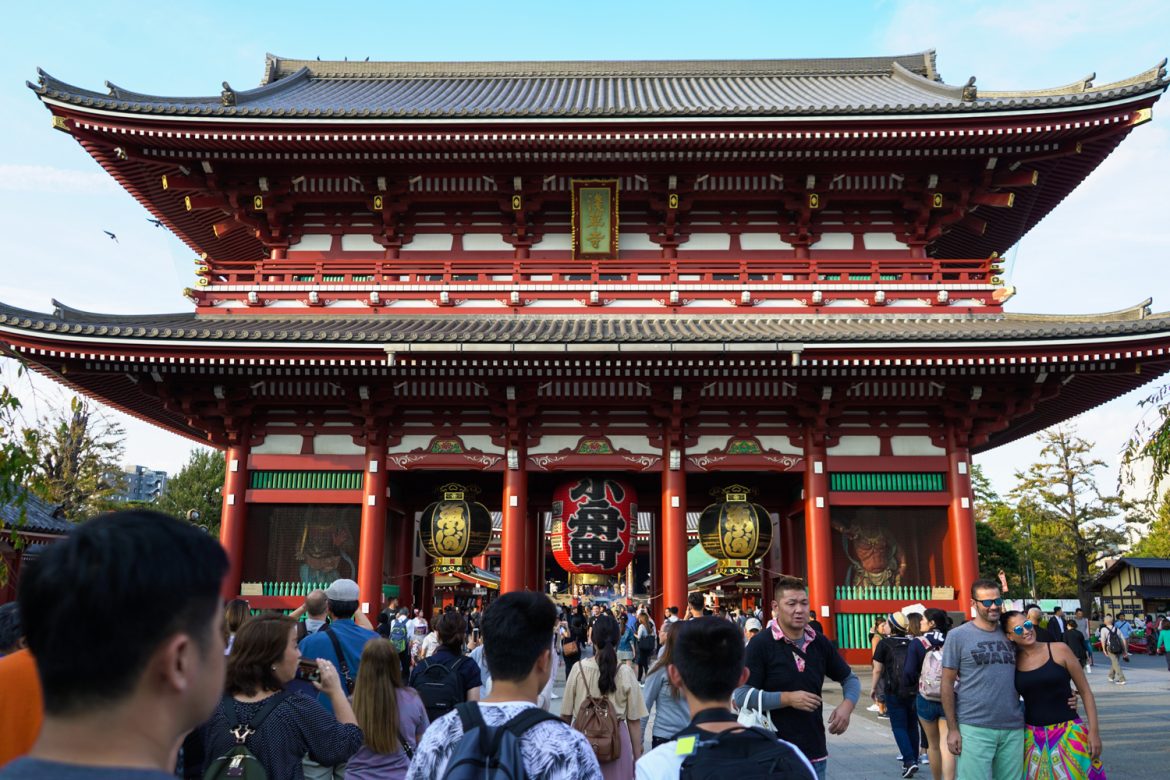 Main Hall, Sensoji TempleSensoji Temple, Tokyo. The main hall of the Sensoji Temple is one of the most photographed temples in Tokyo. While the temple was established in AD 628, the current main hall structure was built after World War II destroyed the original building. Photograph by Timothy Dixon ('20). 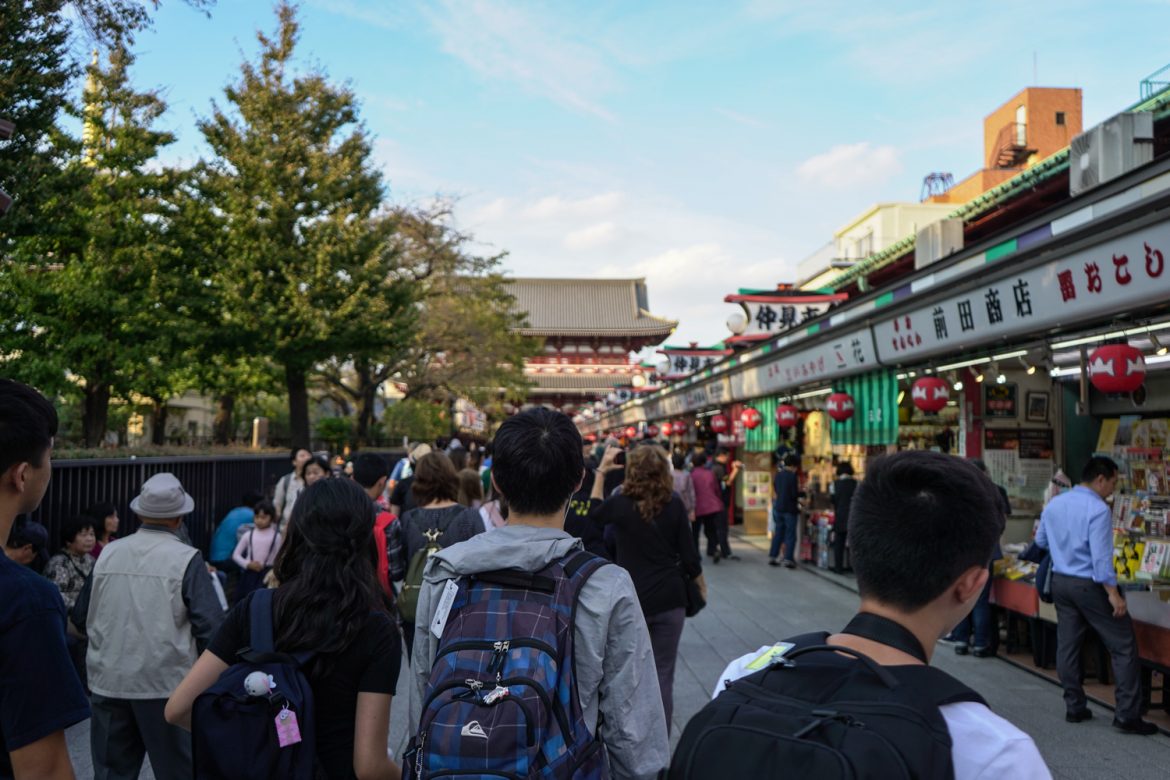 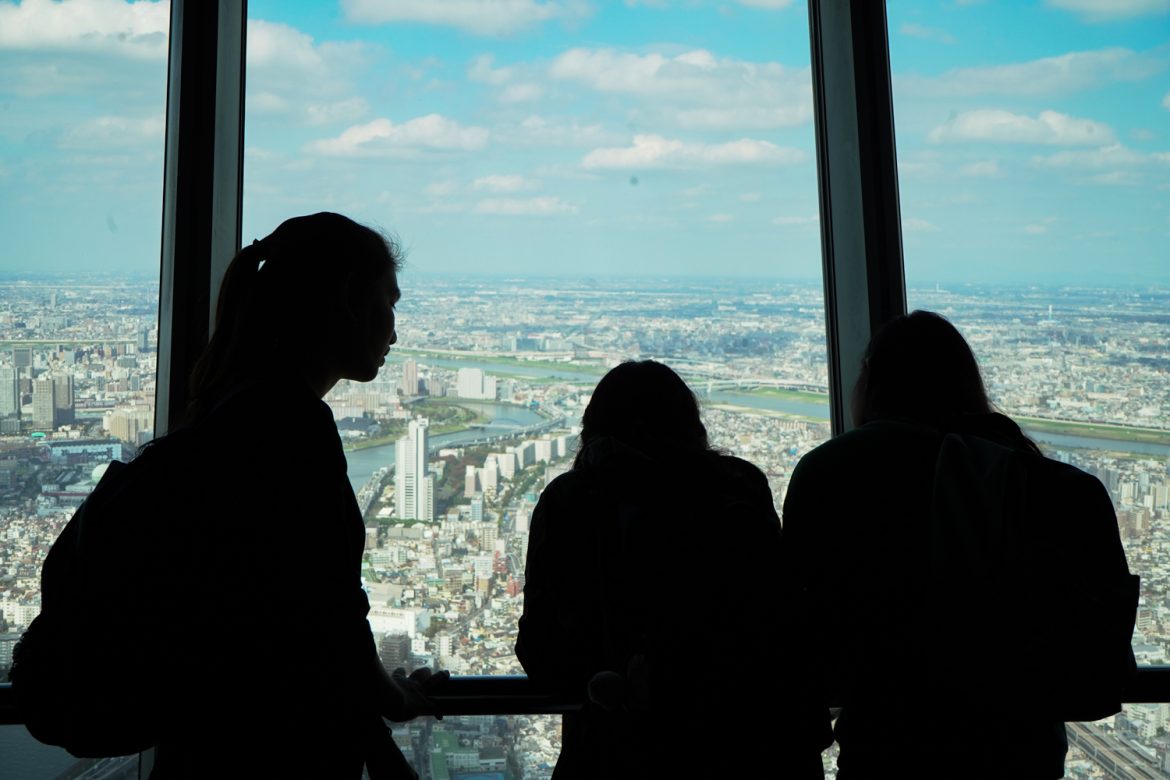 Tokyo SkytreeTokyo Skytree. Three HBA students take in the view of Tokyo from floor 350 of the Tokyo Skytree, the tallest building in the world. Photograph by Timothy Dixon ('20) 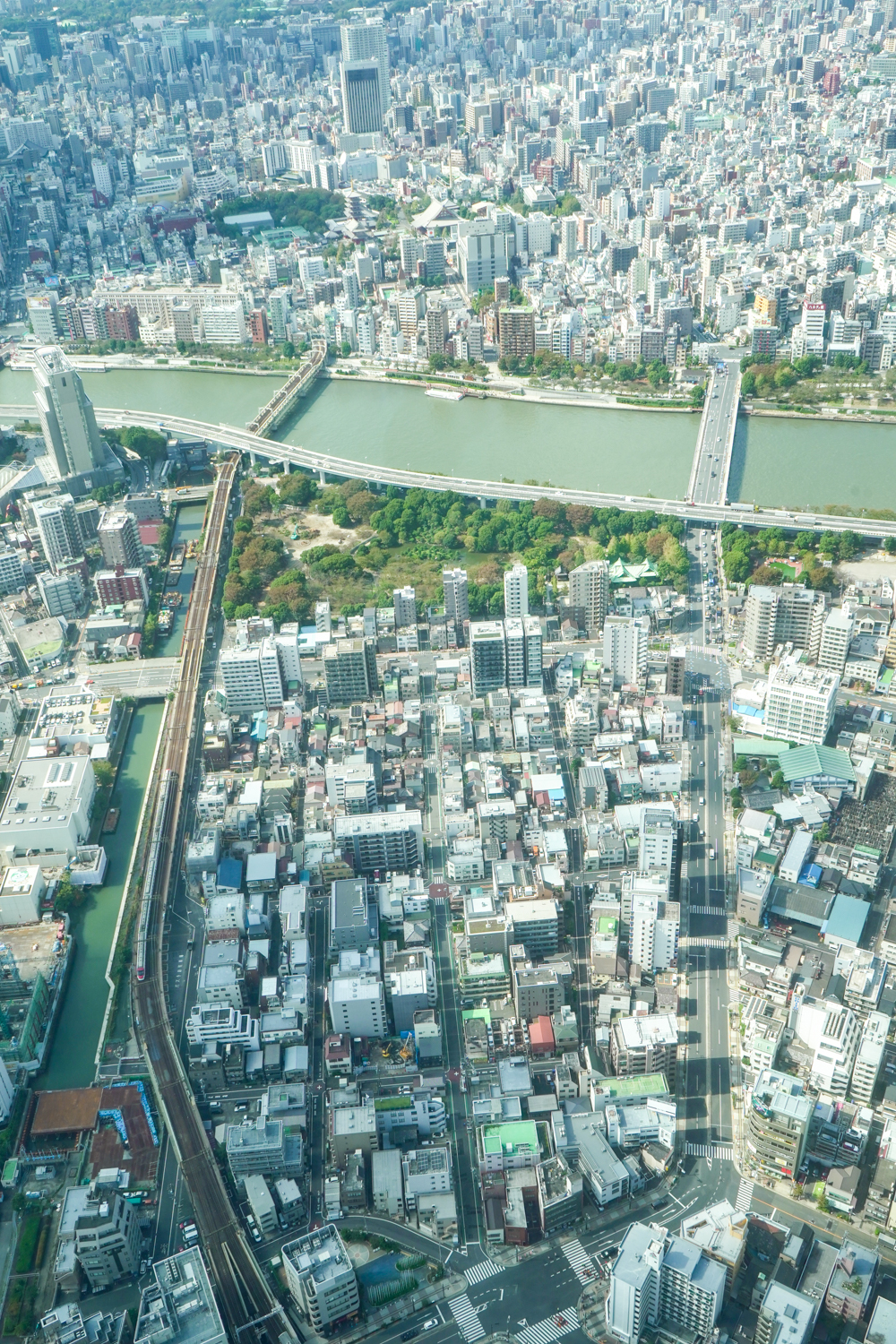 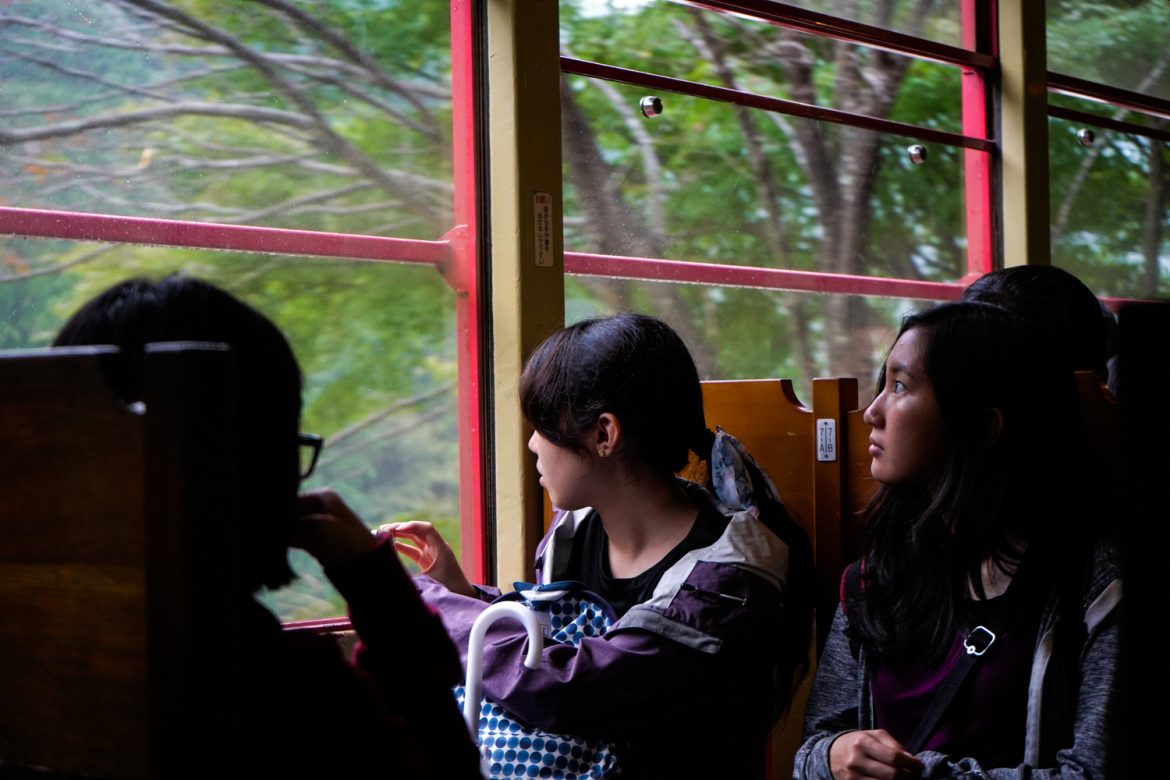 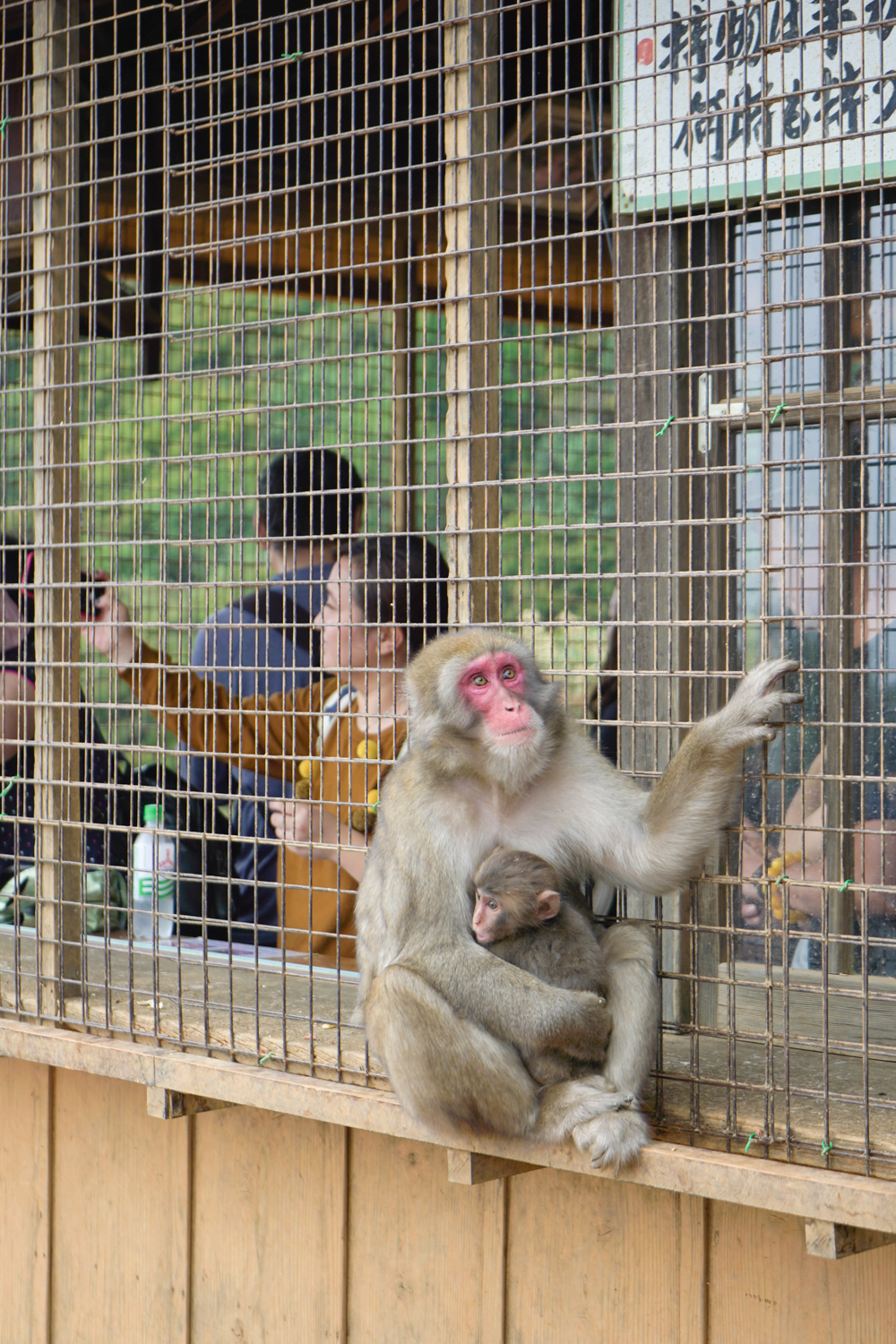 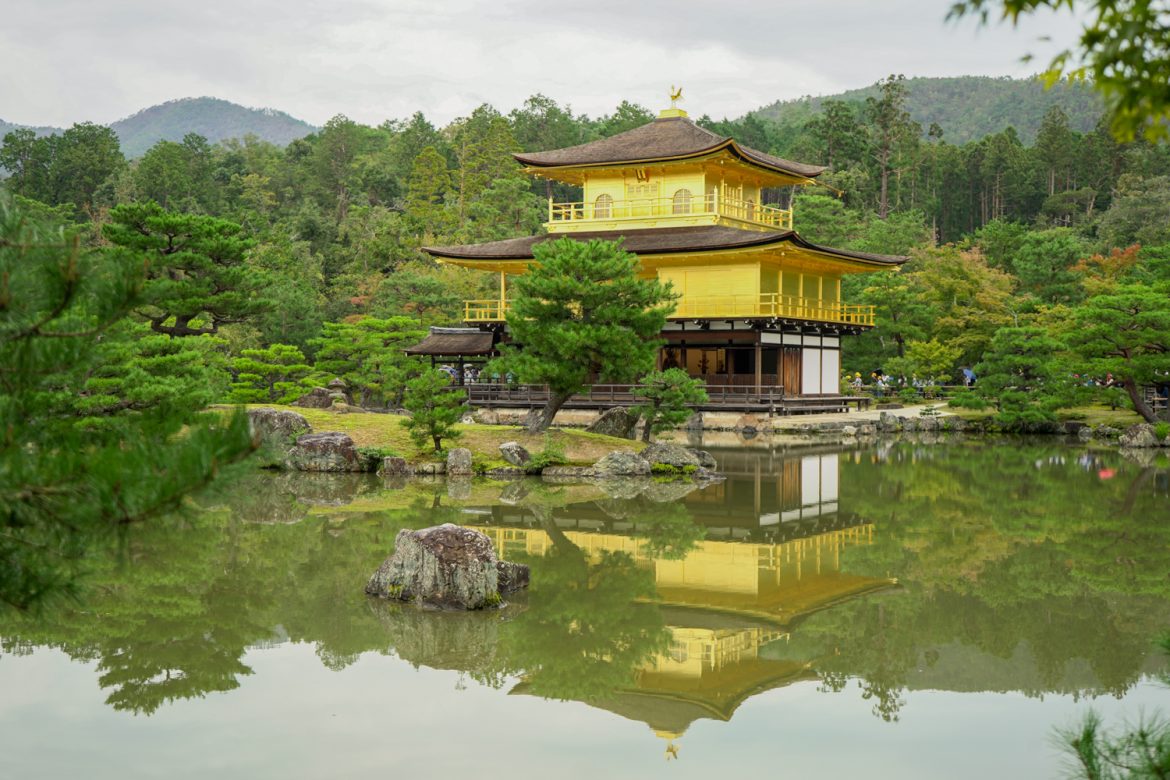 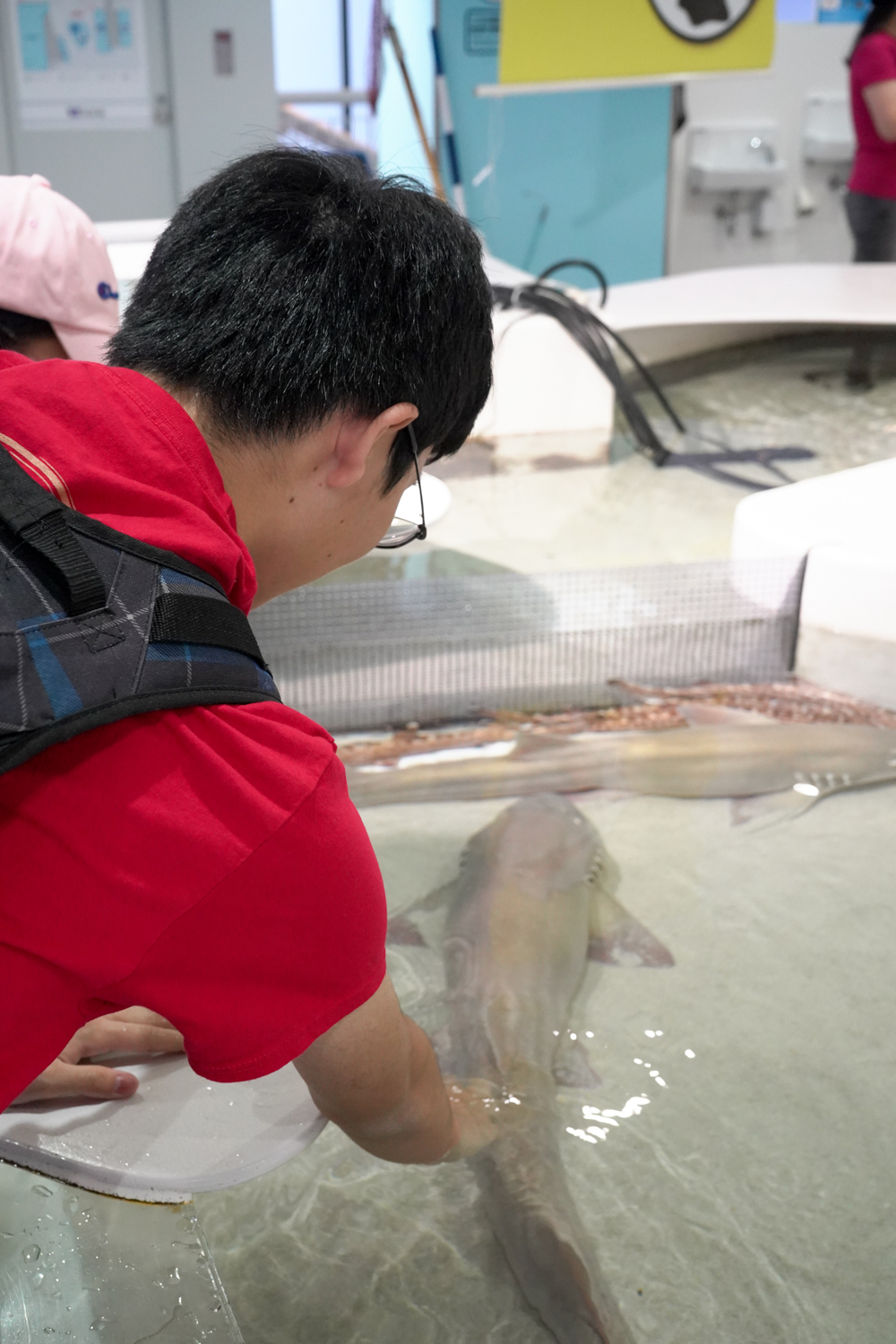 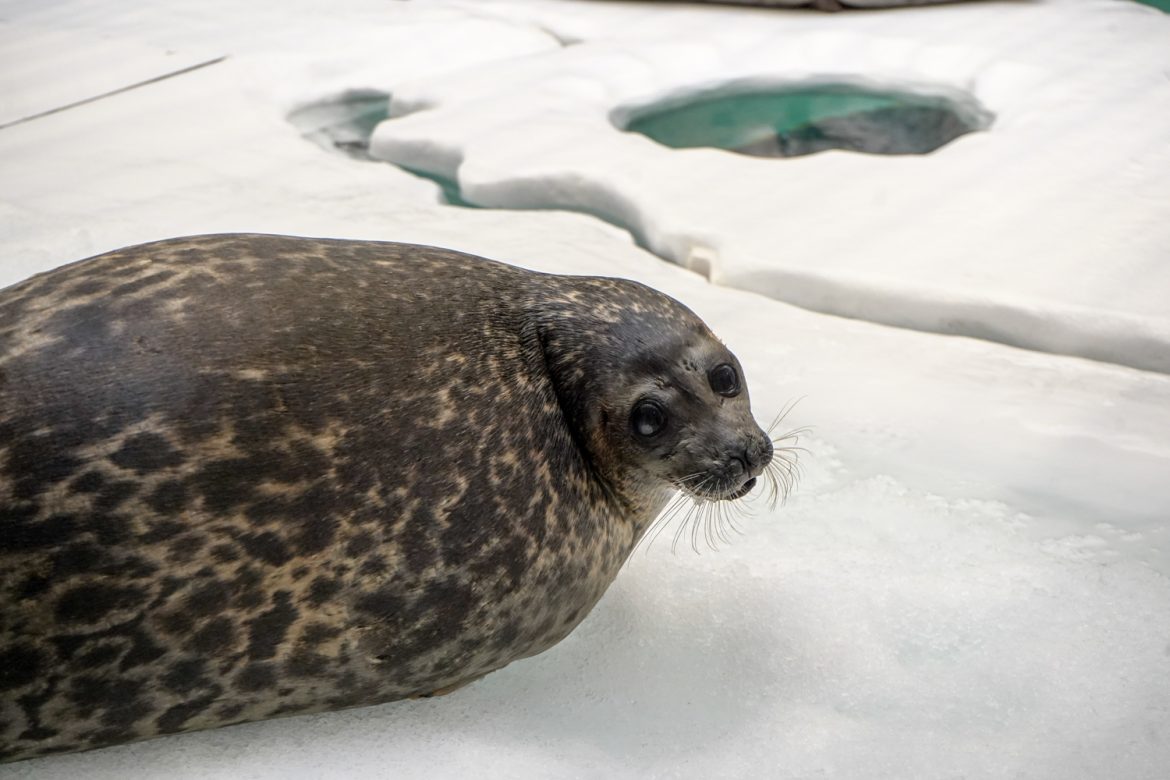 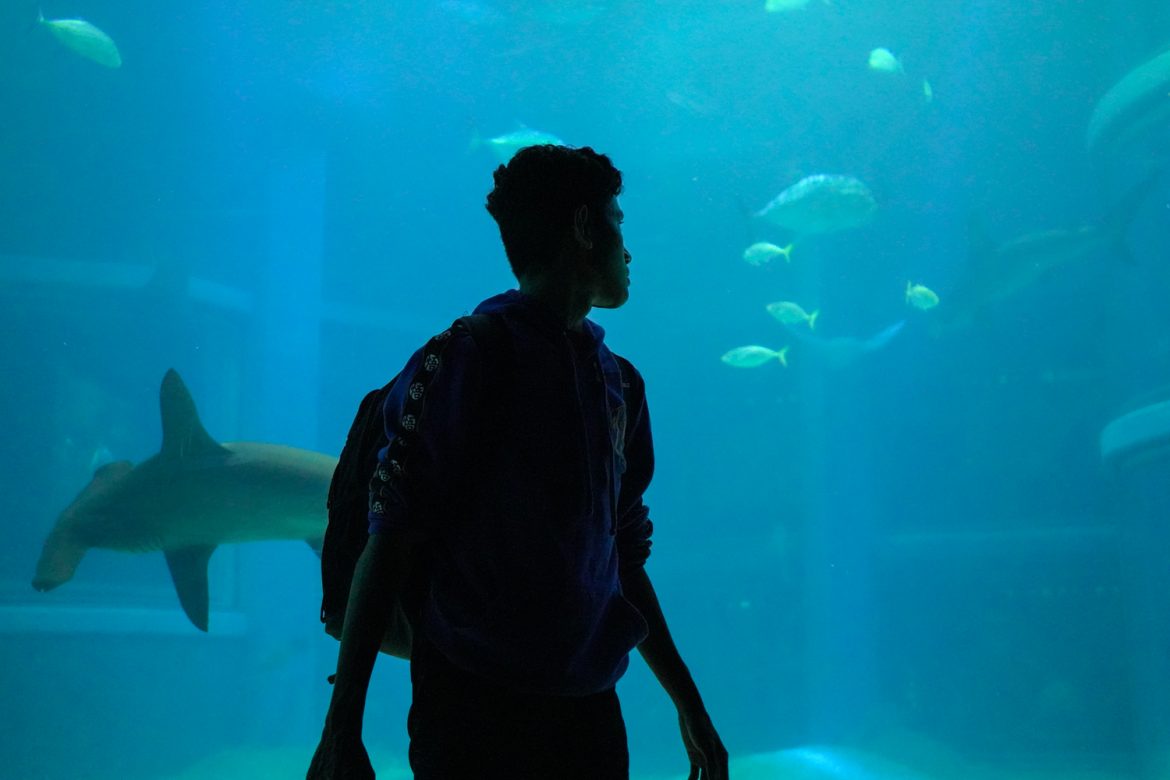 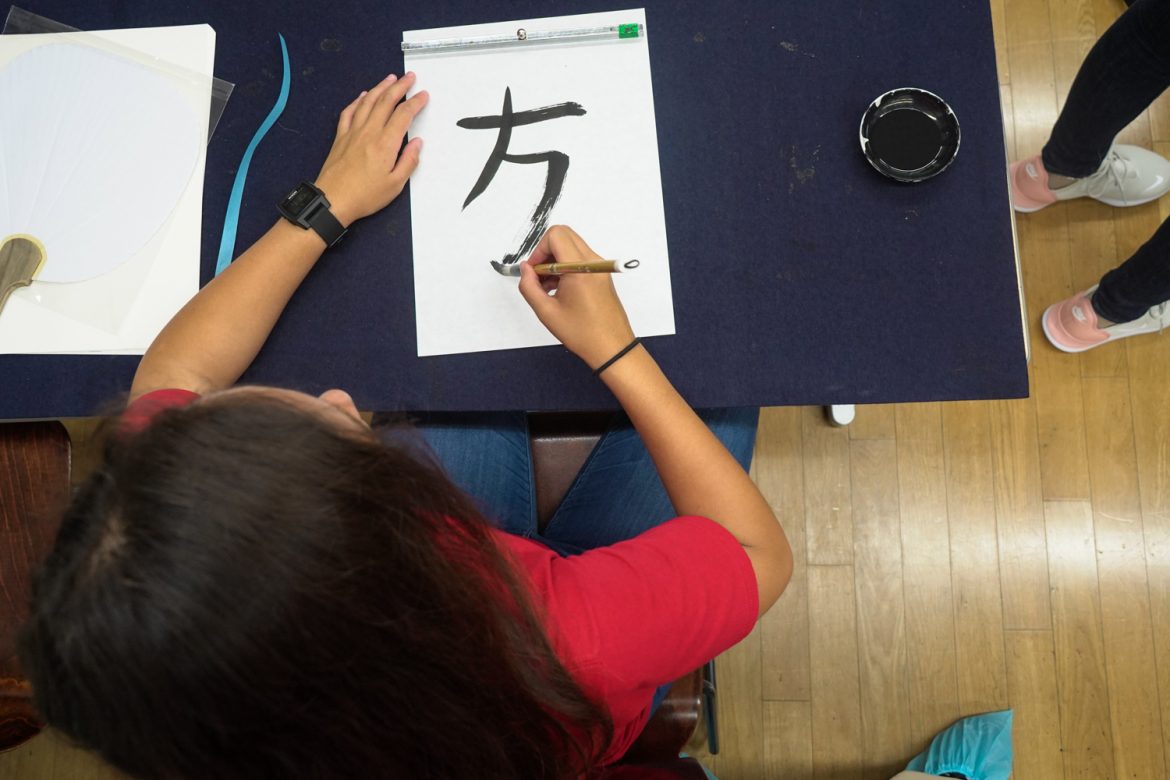 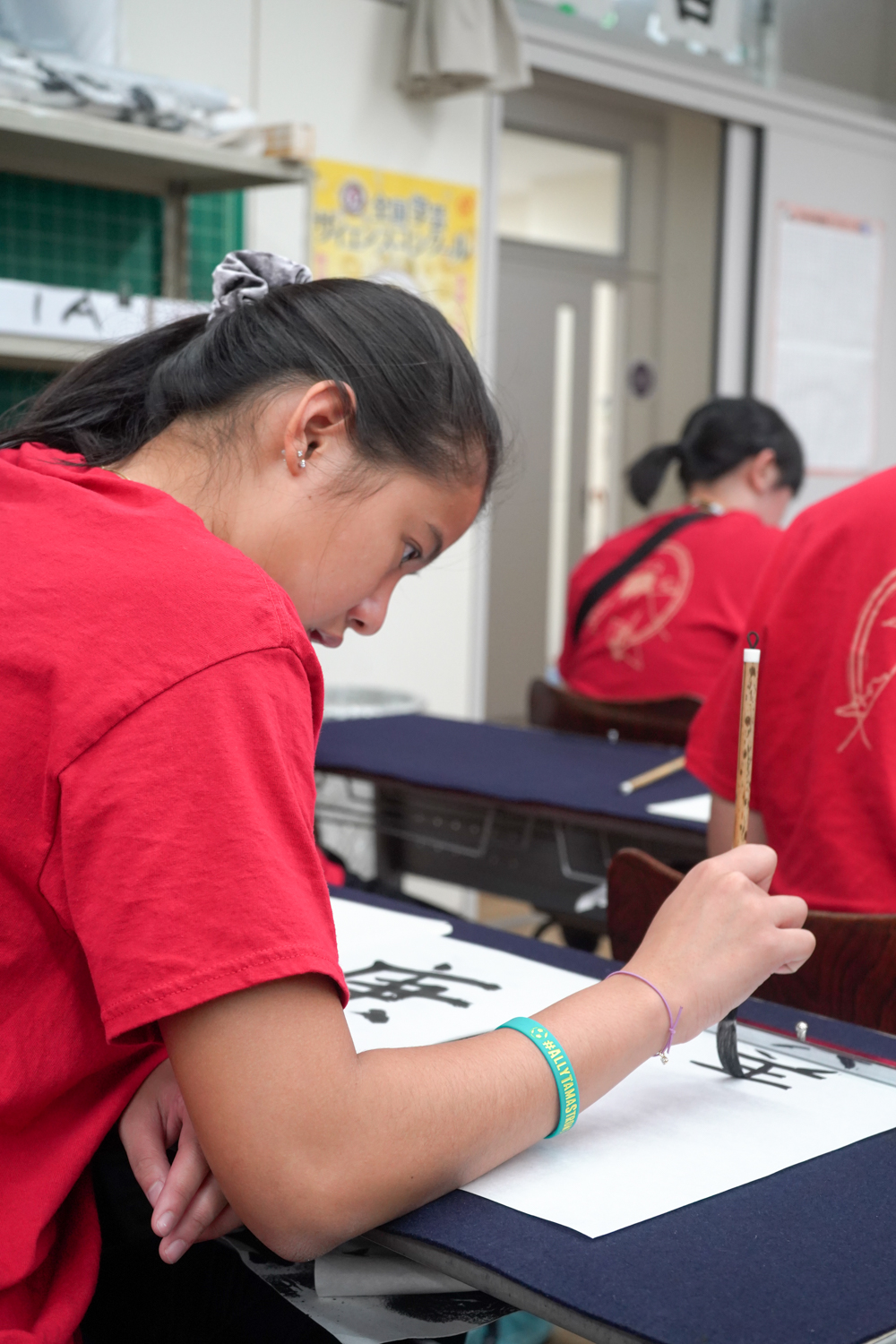 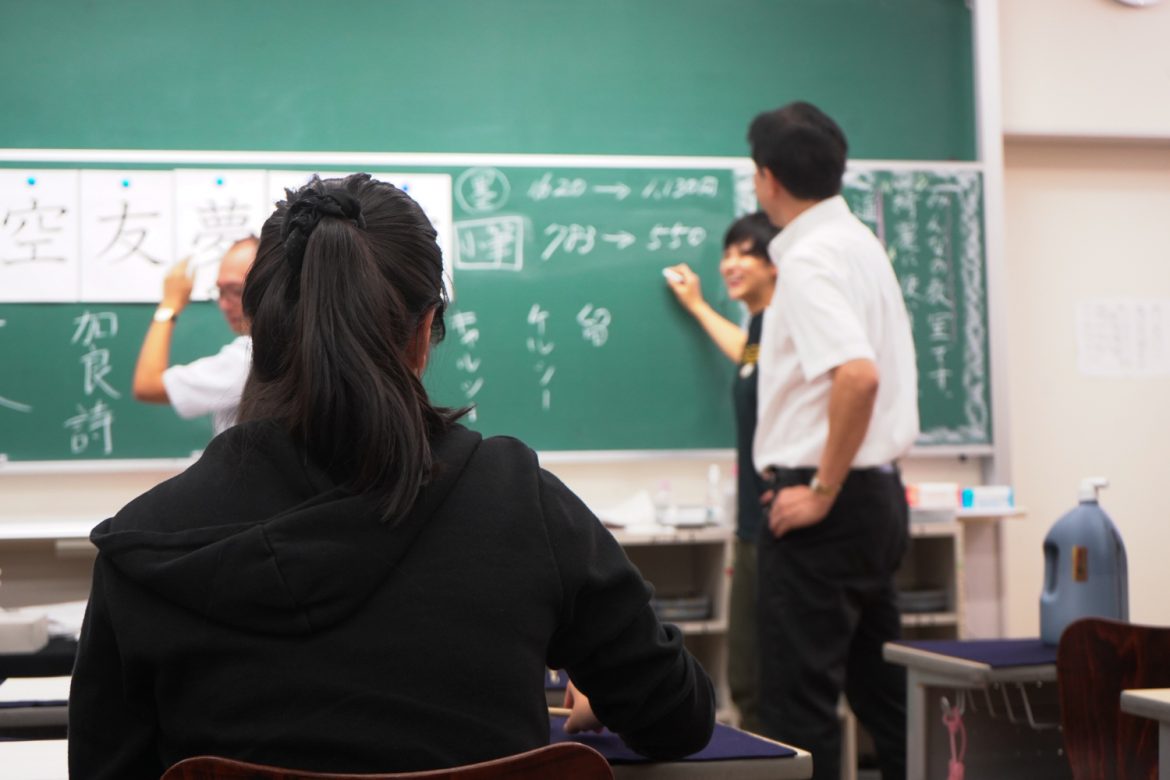 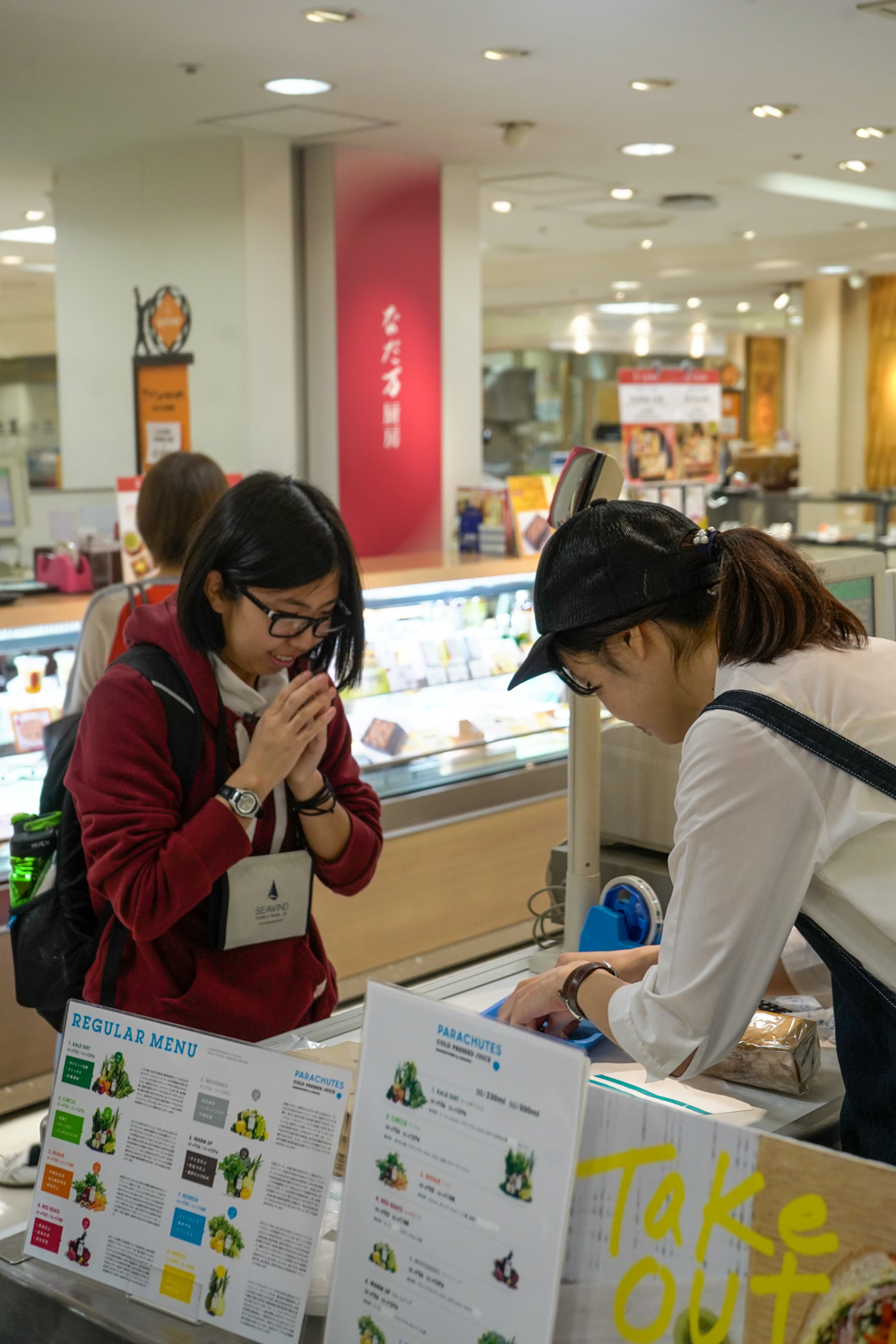 Shopping in JapanSenior Caily Okazaki gets to practice her Japanese while making a purchase in Japan. Photograph by Timothy Dixon ('20). 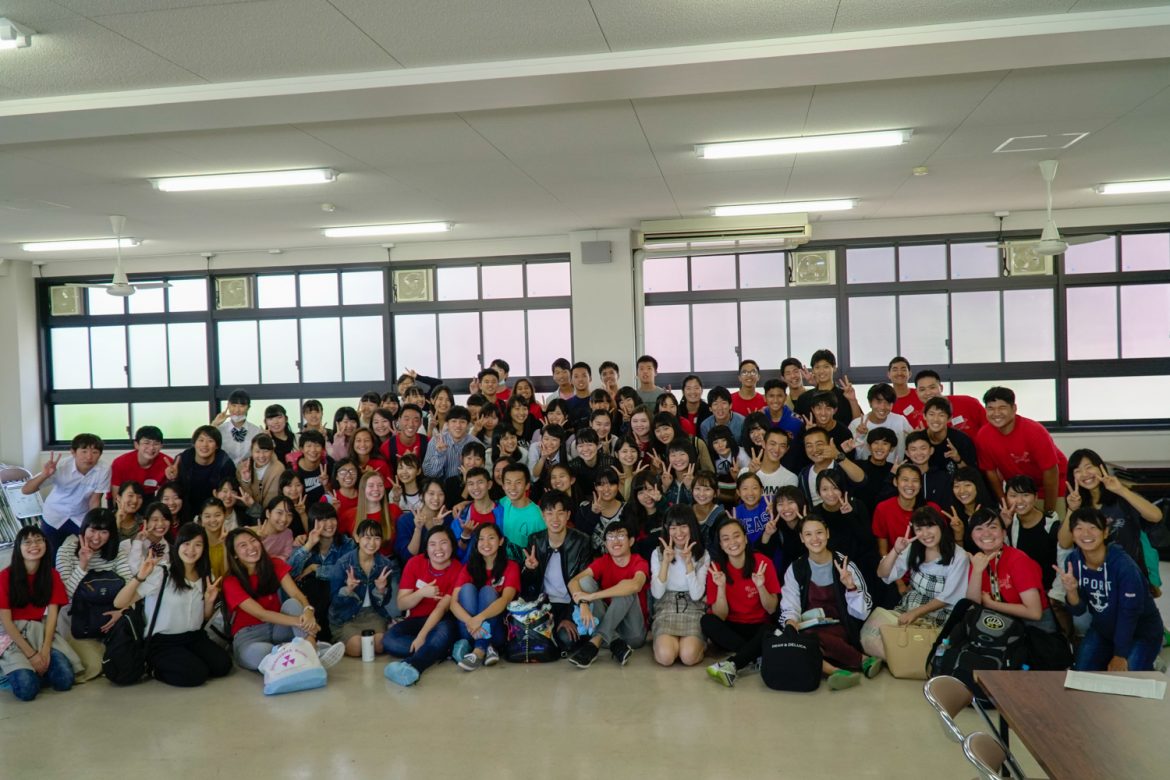 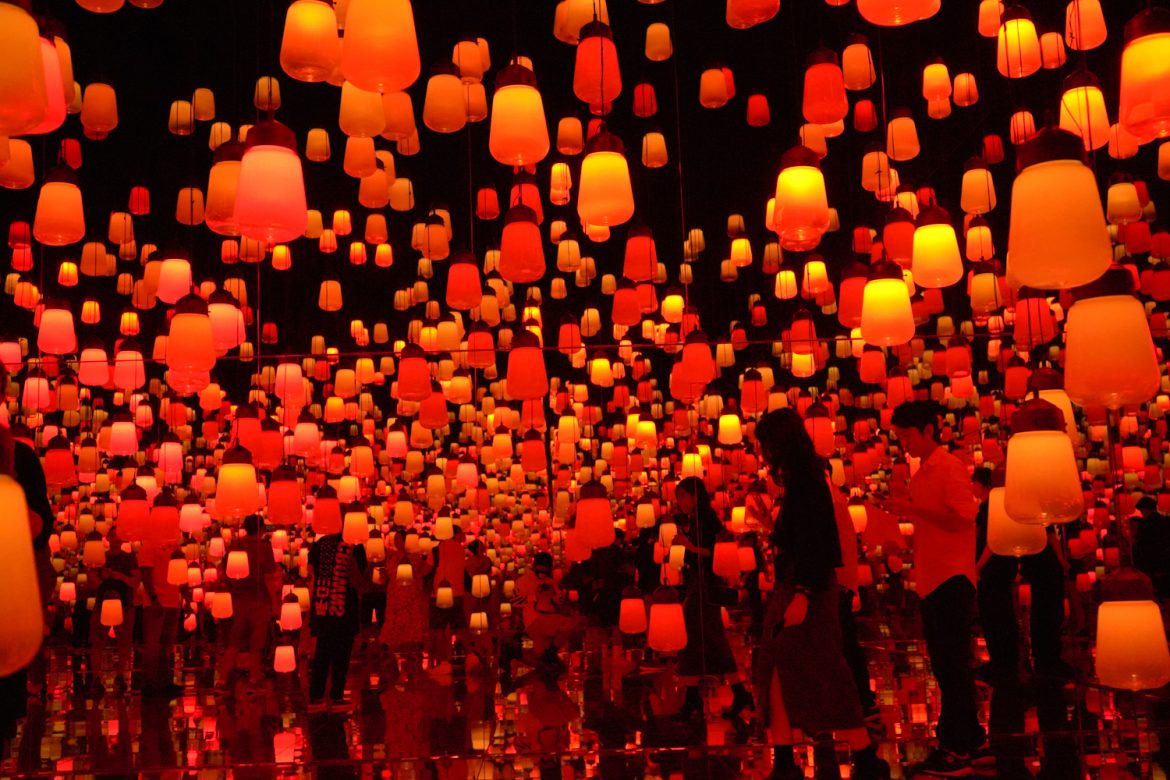 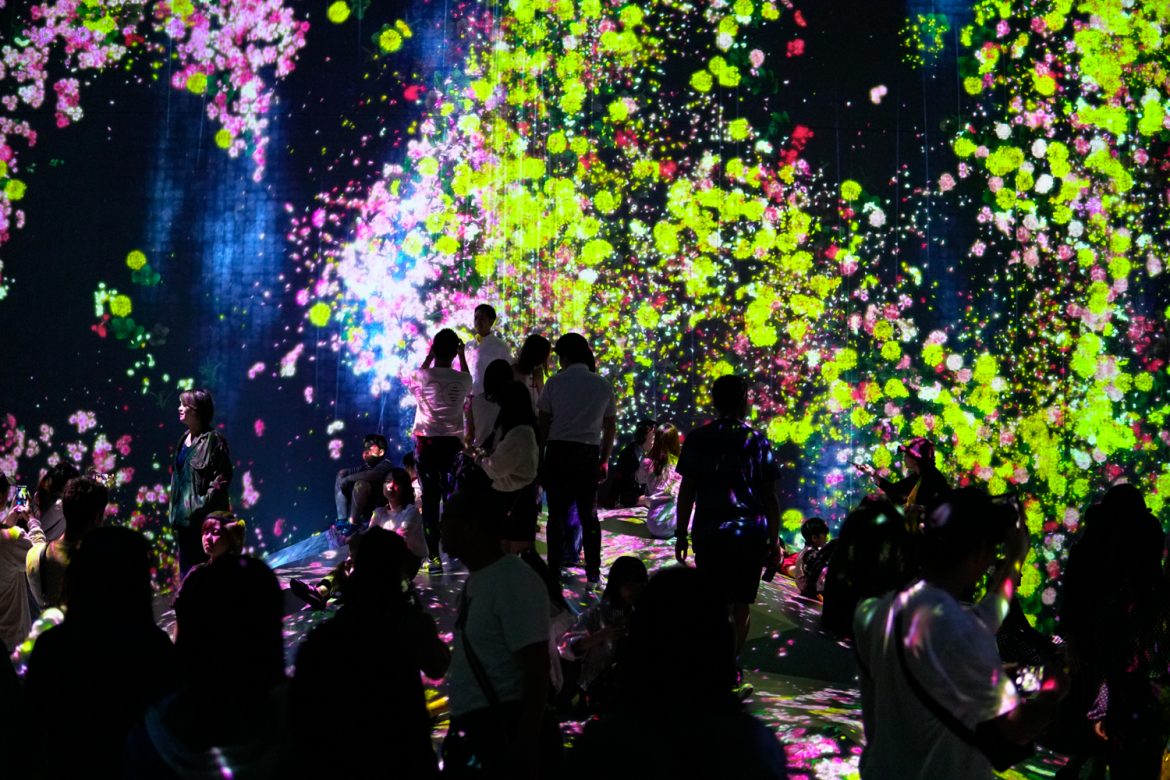 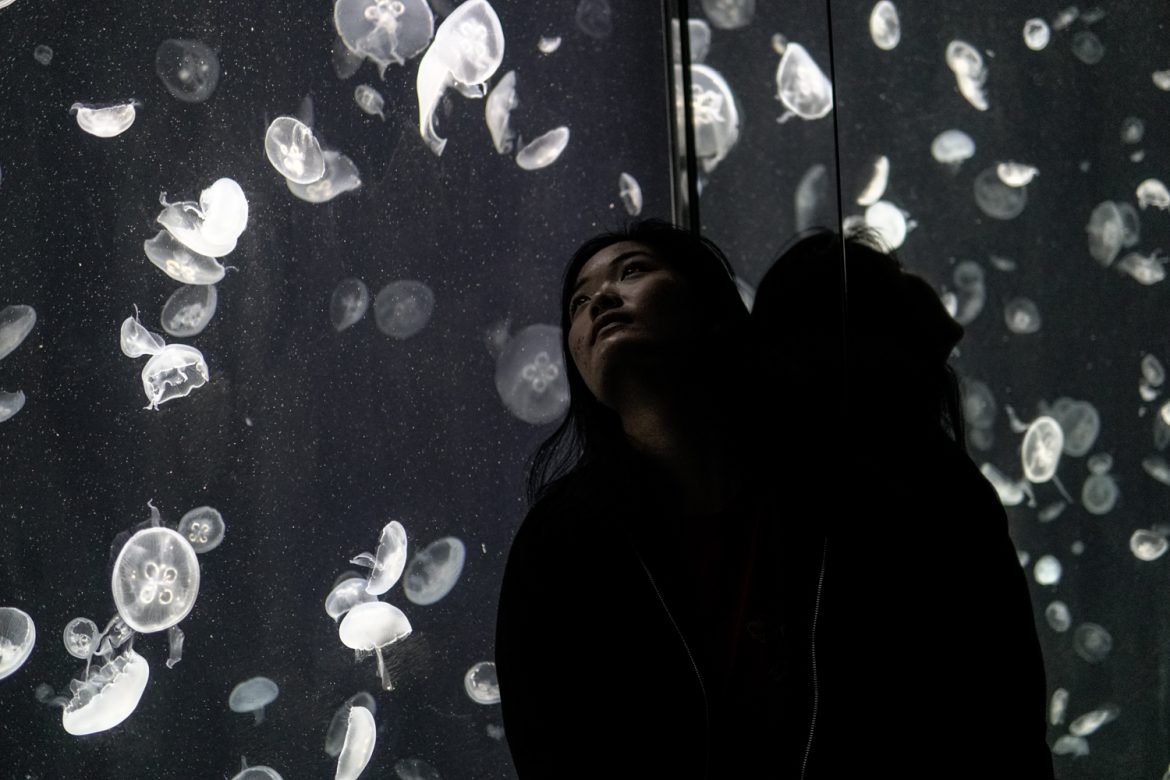 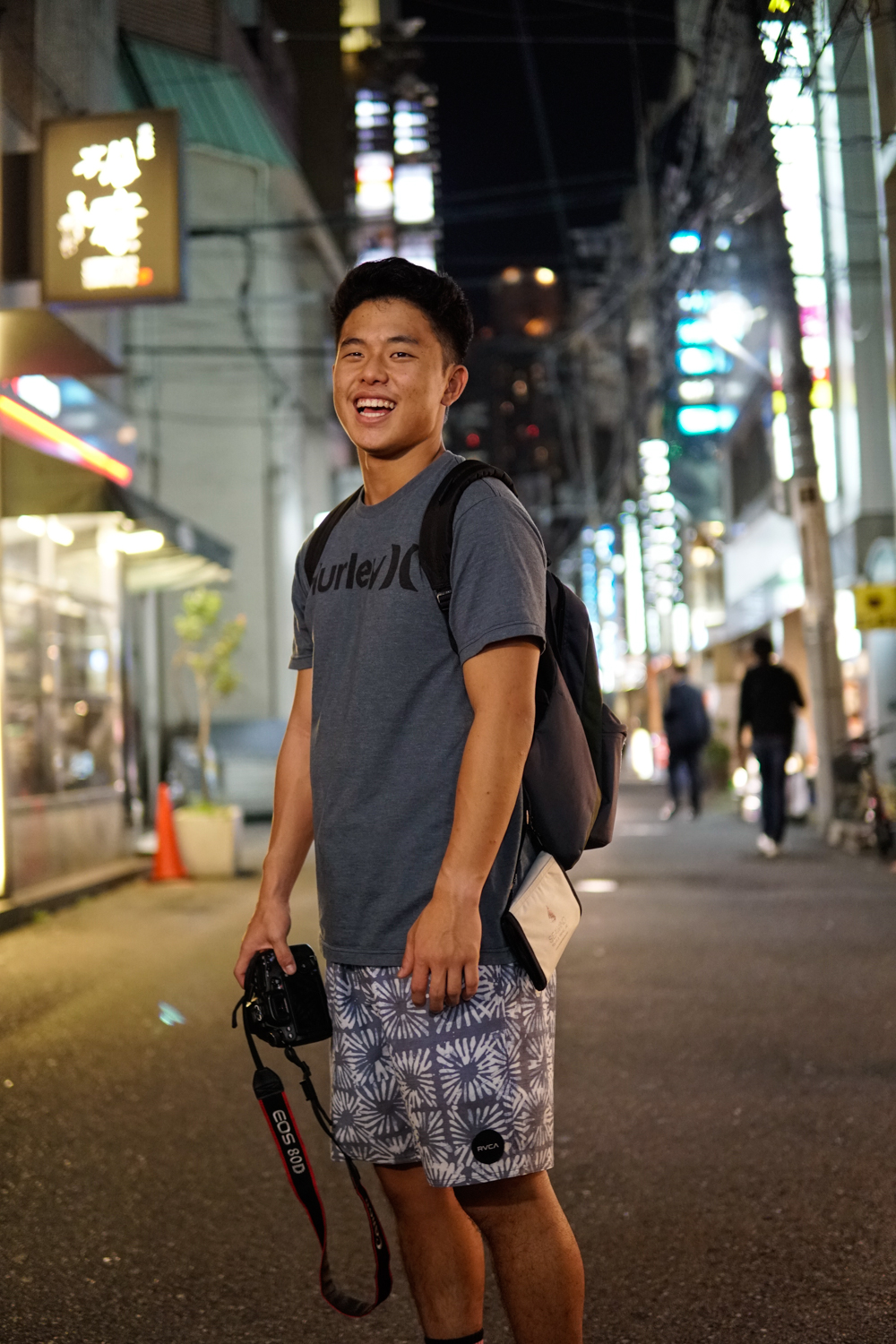 Night sceneJunior Ryder Watanabe explores the shopping area near the hotel where they stayed in Osaka. Free time to explore a highlight for many students on the trip. Photograph by Jarin Ashimine ('20). 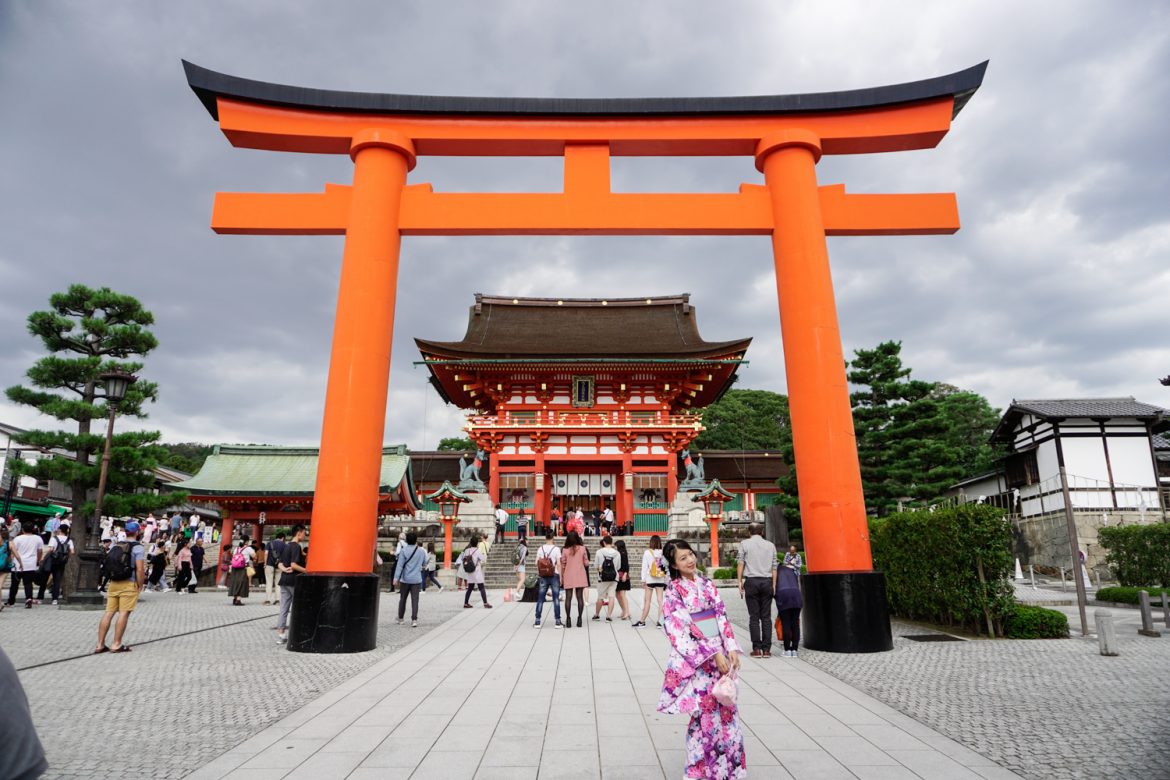 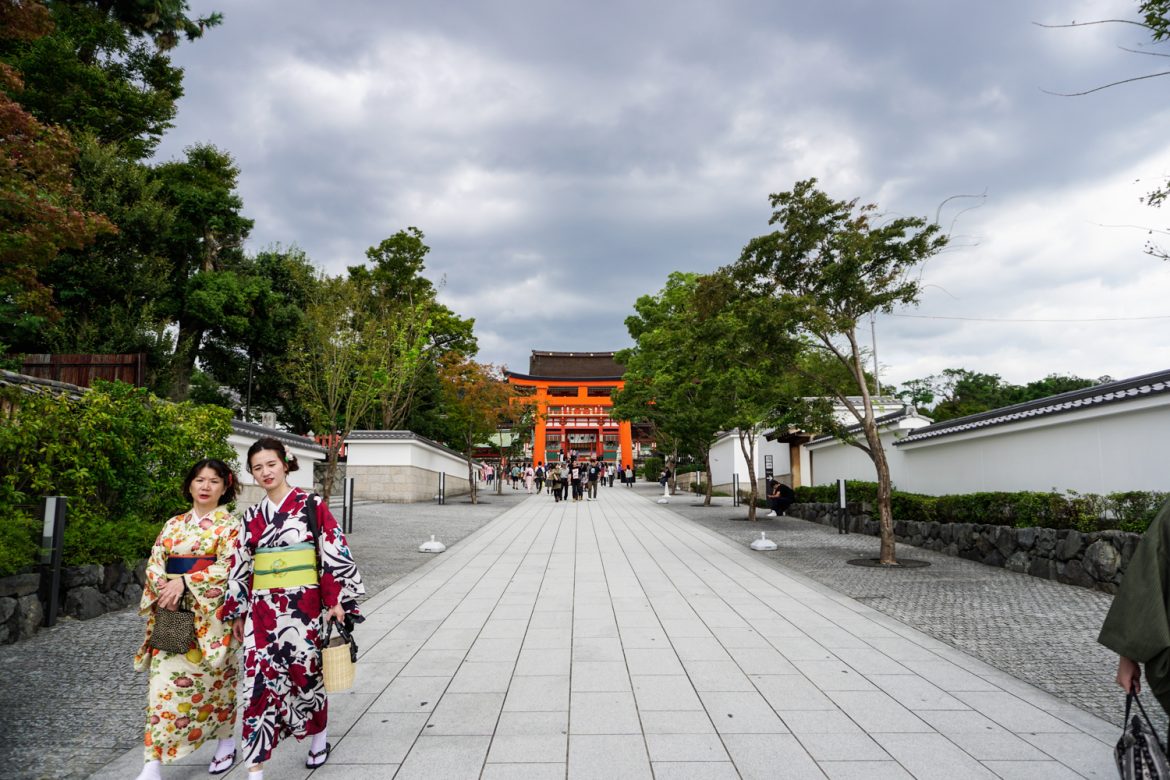 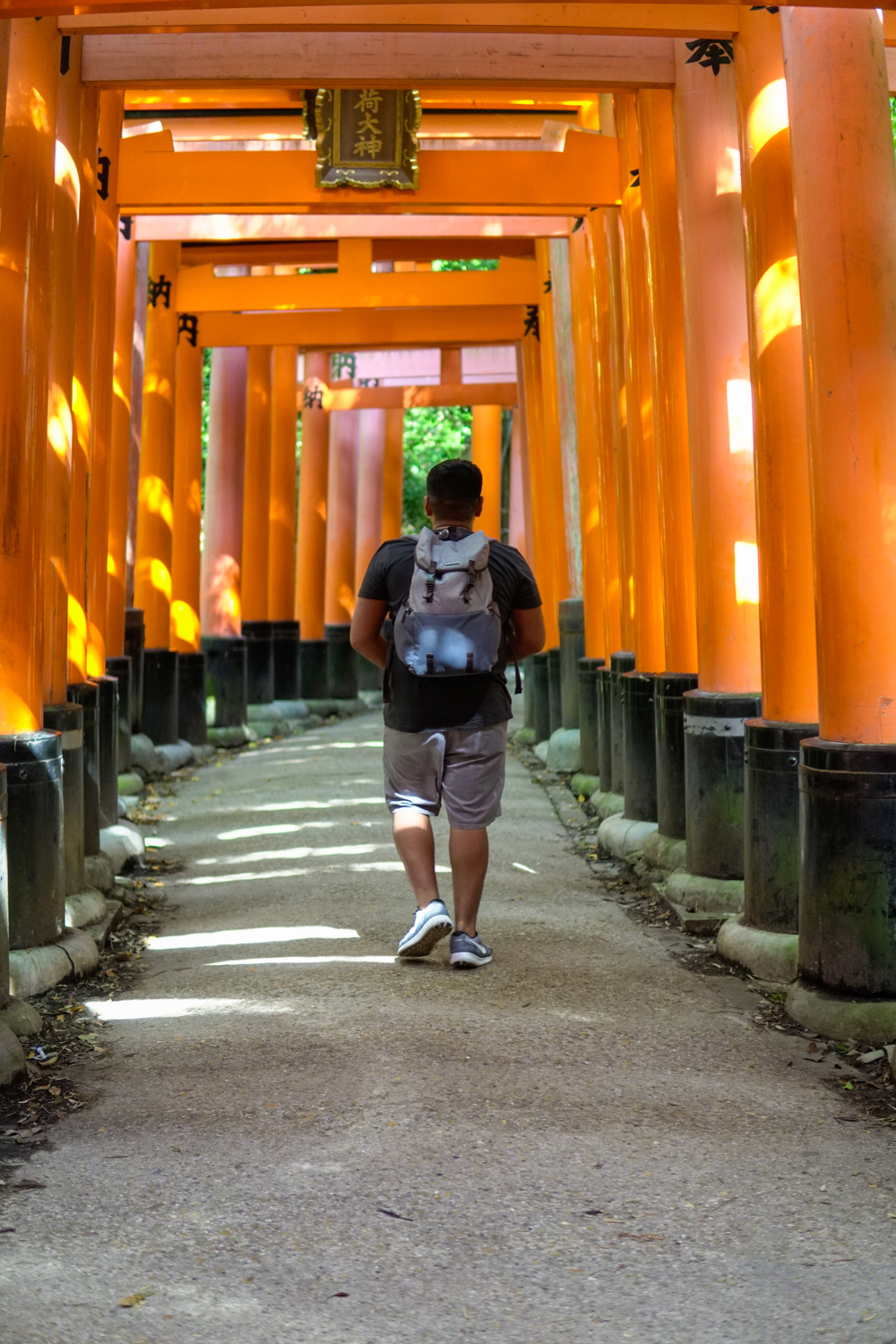 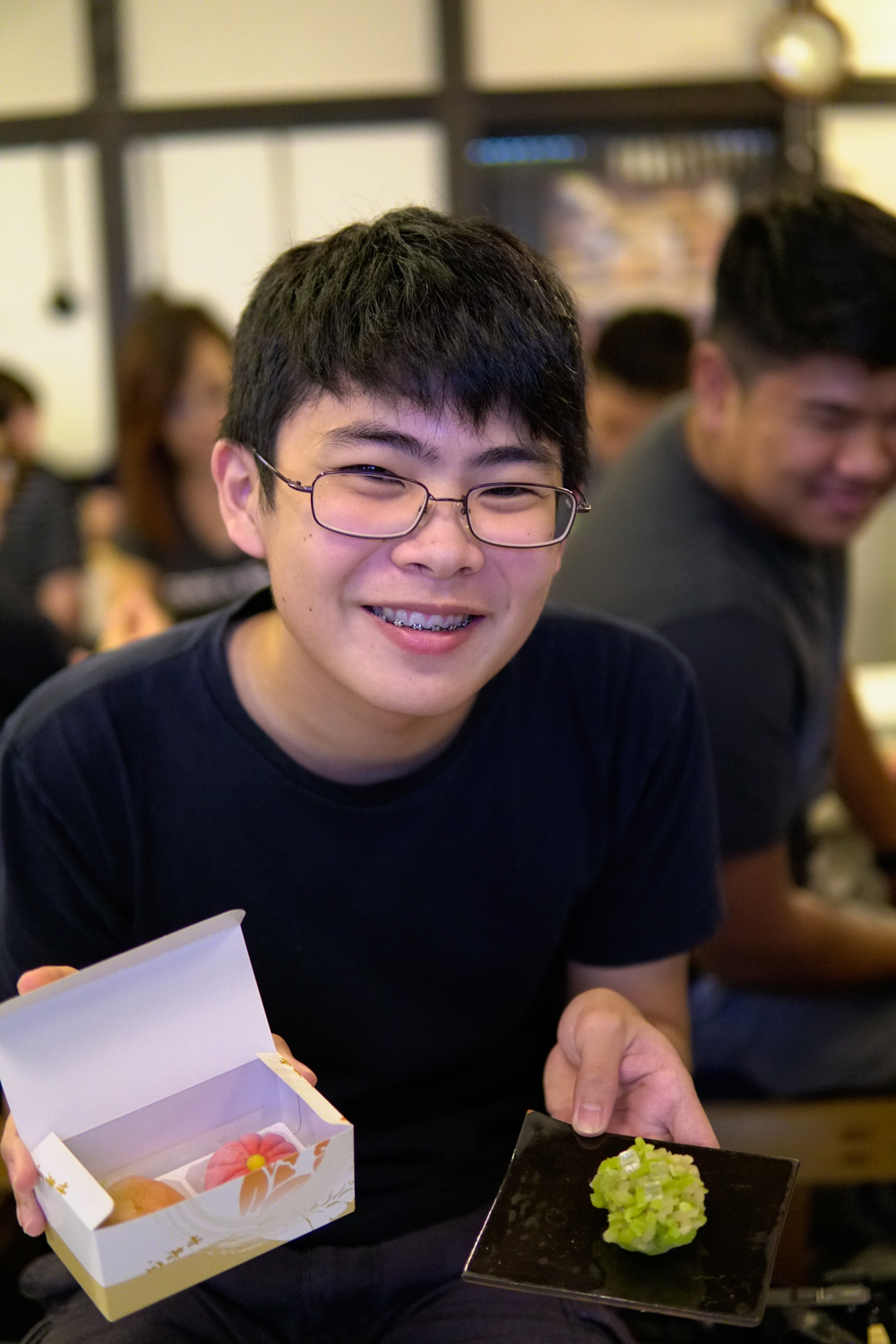 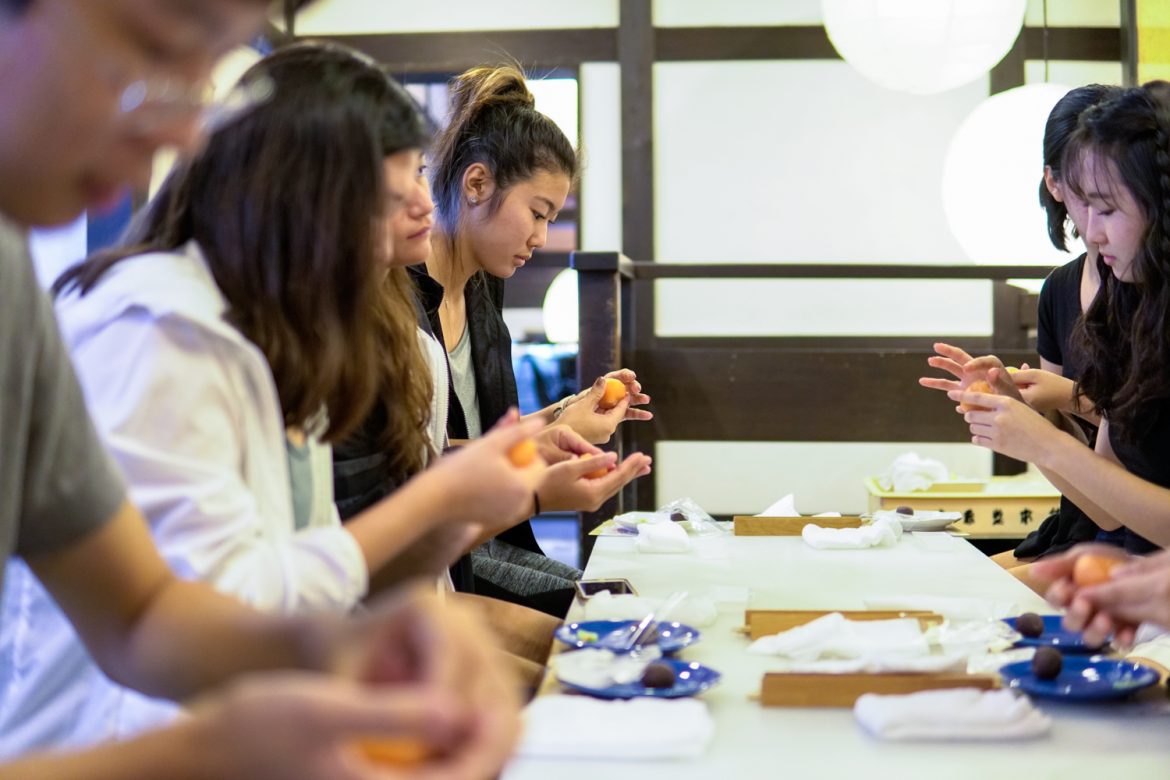