Two days ago I had to say a temporary goodbye to someone who means a lot to me.

I call it a temporary goodbye because I’ll get to see this person again in about four months. And now that I think about it most goodbyes are temporary and that’s something that everyone should know before embarking on an LDR journey.

Without going into too much detail about who this person is and what this person means to me (I’ll save that for a later entry), I will say that we have quite the history and that this person now goes to a school that is about 4,690 miles away from me. So, for now, I’ll refer to this person as 4690.

Anyway, 4690 and I hung out quite a bit this summer. Sadly, this past Saturday was the last day that we got to hang out before 4690 headed back to college. I thoroughly enjoyed myself the entire day however, although we both knew that that would be our last hangout until December, the realization didn’t hit us until the last few minutes of our day. 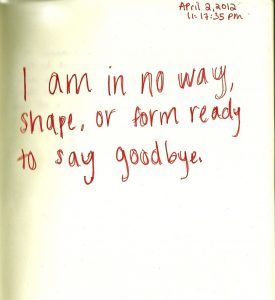 I’ve never been one that’s good with goodbyes; in fact I’m quite terrible with them. But, last Saturday I learned something that I wish I’d learned a long time ago. And it’s something that the famous Dr. Seuss said best: “Don’t cry because it’s over, smile because it happened.” When I had to say goodbye to 4690, I was sad of course, but instead of being overwhelmed by my sadness, there was a little light of hope that kept those tears from invading my face. That light of hope was the appreciation I had for the amazing memories that we made this summer.

If you are also someone who struggles with goodbyes and you happen to be reading this, I’d like to remind you that just because something good has ended, it doesn’t mean that there aren’t more good times to come. Most goodbyes are temporary, and if you want to make more memories, don’t let a few goodbyes hold you down.

Ask Anything: Part One

Should the “Love Does” shirt make a return?

A Meditation Through My Lens