If you care at all about the world of politics, you may have noticed that the stage has gotten a bit crowded.

According to the Federal Election Commission, there are 1486 candidates running for president in the coming year. Obviously, some of these campaigns aren’t actually legitimate, as joke candidacies have become increasingly common. However, humor and cynicism aside, this just goes to show how free America is. Our system allows people from all walks of life no matter how quirky to express themselves on the political stage. Here are some oddball candidates that made a mark last year:

As a well known performance artist and activist, this bearded, boot wearing eccentric has been running for office since 1987. His platform promises two things to all Americans: a free pony and a plan for the impending zombie invasion. On the environment, Supreme believes that “the pony-based economy is truly the most important issue in America today. Fossil fuels are literally killing the planet, and today, we stop that.” He has agreed that if given the choice to do so, he would go back in time to kill Adolf Hitler. When asked by reporters about his plans to defeat ISIS, Supreme responded, “Lots of ponies — pony bombs, pony drones, pony tanks, pony troops, hoofs on the ground, boots on the head.”

Under the slogan “Together, we cat”, this Demo-cat takes one small step for cat and one giant leap for cat kind. Being among the few forerunners of cat-ocracy, McCubbins is a five year old rescue kitty who was admitted for candidacy by the owner’s friend, Isaac Weiss. Although initially set up as a joke, Weiss has stated that the campaign has begun to back issues such as election reform, protecting the environment, and legalizing catnip. McCubbins’ extracurricular interests include sleeping, playing with his scratching post, and tearing paper especially that which resembles model government paraphernalia. In a comment to the Huffington Post, Weiss stated that “for over 200 years, man has been running the show. And now, it’s cats’ turn to help lead the way.” 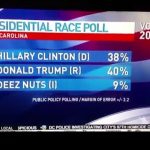 Initially sparking interest after appearing in a survey by Public Policy Polling, Deez Nuts earned 9% of a voting poll against republican Donald Trump and democrat Hillary Clinton. His identity was a tough nut to crack until he eventually revealed himself to be 15-year old Bradley Olson from Iowa. Nuts told Rolling Stone that his candidacy was fueled by an attempt to break the two-party system and his frustration with the front-runners. Although only 15, Nuts has formed his own opinions on problems plaguing the political world. On immigration, he believes that anyone who is found to be an illegal immigrant must be sent back to their country of origin and should be ineligible for future U.S. citizenship. On the subjects of abortion and gay marriage, he said, “I feel that as equal human beings that we should be allowed to choose how to live our lives without being discriminated by one another. At the same time however, I also understand that people believe that Christian religion outweighs government policy. But America is no longer mainly Christian.” 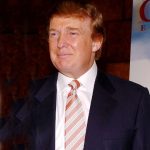 Out of all the candidates prior, there is no doubt that you have heard of Donald Trump. Although he has no political background, this real estate tycoon is on a mission to “make America great again” as his slogan suggests, and is not afraid to tell you how it is. For the past 26 weeks since the announcement of his candidacy, Trump has sent shock waves throughout mainstream media with his provocative statements. In statements about immigration, he said, “When Mexico sends its people, they’re not sending their best…They’re sending people that have lots of problems, and they’re bringing those problems with us. They’re bringing drugs. They’re bringing crime. They’re rapists. And some, I assume, are good people.” He has vowed to have a wall built on the American-Mexican border with Mexican funds and fine Mexico $100,000 for every undocumented immigrant within U.S. borders. He called for an end to gun free zones in response to a shooting that killed marines in Chattanooga, Tennessee saying that “they never had a chance.” Most recently, Trump has called for a ban on all Muslim entering into the U.S. until the government can get a handle on the situation. Most campaigns would crumble under such allegations, yet for Trump, it has launched him into the position of the republican front-runner and perhaps the republican primary candidate.

Although these candidates appear humorous, let’s be honest with ourselves. The practicality of these candidates running the country is unthinkable so the cat-ocracy is off the table (sorry McCubbins). In a political world of deceit, people are looking for a reprieve; someone who won’t or can’t lie to them like politicians do. In a political world of seriousness, younger voters look for something to laugh at or to talk about. Trump has exuded truthfulness throughout his campaign but some things are best left unsaid. Nuts’ name is hysterical and seems fairly reasonable, but the fact is, he is too young to actually be president. While our frustration with average politicians and frontrunners may drive us off towards more comical personas, we need to remember to think in moderation if America is to maintain its stability.

We Can Always Give