After six years of trying and two straight heart-breakingly close second place finishes, the Class of 2018 has finally won Spirit Week during their final year, taking the much coveted Mana Cup.

The seniors, who were only a few points from first last year, rallied after a disappointing Platform Jam performance, which had them in second place for much of the week. They managed to seize first place in the All School Cheer, Banner, Pepper Squad, and the Charitable Donation categories, while tying for first with the juniors in the mascot competition. This sweep, coupled with their performance in the Tug of War (tied for first place), Capture the Flag (second place), and participation in each day’s dress up theme (consistently tied for first), allowed them to surge into first place with aplomb.

Here are the final standings, as announced at tonight’s homecoming game: 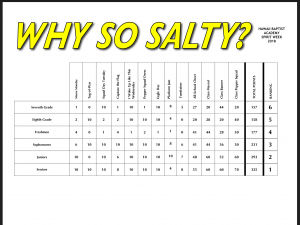 The Challenges and Rewards of AP Courses

The Art of College Applications