On May 30, 2016, Hawaii Baptist Academy announced that the school is updating its uniforms for the 2016-2017 school year and beyond.

The new uniform polos—available in grey, white or black (in dri-fit material)—feature the school’s logo on the front and left side. Yellow and green polos will no longer be available. As for the uniform bottoms, new skorts have been added including a grades 7-12 khaki skort and a grades K-12 black skort. To allow families to “ease into the transition”, the administration will allow students to wear the old uniforms through June 2018.

While many factors were taken into consideration for the design of the new uniform top, HBA President Ron Shiira said that the main concern was school pride and identity.  “[The old logo] was too subtle, ” he said, “so we took the embroidered letters off and put our school’s logo on the front, left side of our uniform shirts.”

Shiira explained that even though it was a popular choice among students, the green polo was eliminated as it is not an official school color. Gray was added to the color palette because “it serves as an intermediary color and is easier for [the] younger students to keep clean.”  As for yellow, he said, it was taken out due to fewer purchases by students.

While many factors were taken into consideration for the design of the new uniform top, HBA President Ron Shiira explained that the main concern was school pride and identity.

Many students both new and returning have bought the new uniforms. New freshman and former Damien Memorial School student Caleb Caetano-Castro enjoys the comfort and simplicity of HBA’s uniforms. Coming from a school with a very formal uniform—dress shirt, tie, dress pants, belt, dress shoes, dress socks—Caetano-Castro likes the HBA uniforms better because he can wear just a polo shirt and shorts. To him, the new uniform “feels good and is way more comfortable.”

While many students like how comfortable the new polos are, some feel that the logo is too large. Senior Alexys Adriance feels that the “gigantic logo” makes it hard for her to be anonymous in public places. “When you go places, you don’t always want people to know what school you’re from,” she said. Senior Tiara Moss agreed and said she would prefer that the logo be kept on the sleeve.

In an effort to foster more school pride, middle and high school students can now wear Spirit shirts with jeans or school bottoms every Friday. Shiira hopes this will “allow for more flexibility with [the] uniform policy.”

So far, school administrators report that the black dri-fit shirts have seen high sales and that they have received many positive comments from students about the lighter material.

The uniforms are available for purchase at Mills Wear online at www.millswear.com (school code: 6869), or at their retail store at 650 Iwilei Rd., Suite 180, Honolulu, HI 96817. Pricing information can be found below. 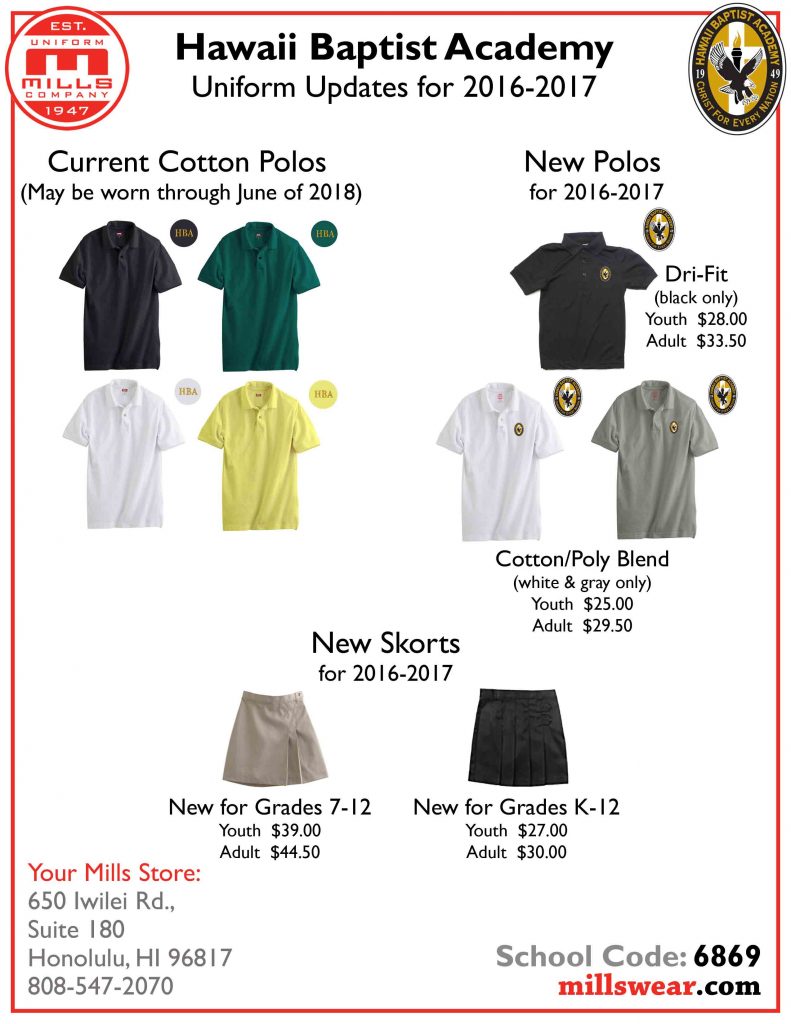 Written By
Aimee Clark
More from Aimee Clark
As an experienced Tumblr blogger of fashion, I know what’s trending, the...
Read More

WELCOME BACK TO SCHOOL!

Poll of the Week