At first glance, Burger King’s Chicken Fries look nothing like the thick cut pieces of chicken coated with breadcrumbs and deep fried to golden brown perfection that are shown on television ads and posters.

When I first opened the box, the stick-like, scrawny strips of breaded meat look like nine brown heads in a cardboard box. Not a very good first impression. The box is entertaining to look at though, adorned with the face of a cartoon chicken. I’m sure a box with the face of the actual chicken on it wouldn’t be nearly as nice to think about while you munch on the little birds. This snack is like that one kid no one really likes at the beginning of the year. However, once you meet them, they’re not too bad. Especially when you eat them within 10 minutes, it’s fried chicken without the bones. Worthy of the name “chicken fries”, they have a not-too-fatty-but-just-right taste. A bit of a spicy kick at the end finishes off the “chicken McNugget-esque” flavor. After the conclusion of the “sweet spot”, the crusty exterior begins a slow spiral down a soggy slide. Though the taste of the chicken doesn’t differ, it’s outer blanket of crumbs becomes limp, losing the crunch it had before. 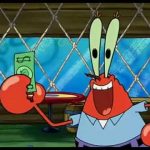 I’m very frugal (almost as bad as Mr. Krabs) and after I found out they cost $2.99 (I had already eaten one box), they seemed skinnier and less filled with the promised “all white meat chicken” from Burger King’s Menu. Of course I still ate them. They might be overpriced but they still taste pretty good.

Up and Coming: Salted Lemon