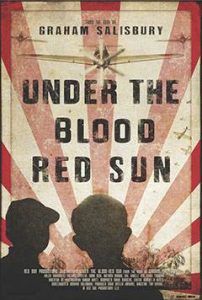 In our lives, there are certain stories we never forget.

These stories introduce themselves to us, asking for a chance to earn a place in our hearts. The ones that win us over stay with us and become a part of our identity. Graham Salisbury’s Under The Blood-Red Sun is one of those stories that has stayed with me ever since I read it in the fifth grade. I recently had the privilege of watching this beloved book transform into a movie directed by Tim Savage, who graduated from HBA in 1979.

Under The Blood-Red Sun follows the life of young Tomi Nakaji, a Japanese American, living in Hawaii in 1941. Tomi faces the challenge of having to deal with his grandfather who insists on keeping his old Japanese ways, in spite of the war raging between the U.S and Japan at the time. Keet Wilson, whose Caucasian family owns the property the Nakajis live on, bullies Nakaji because of his Japanese background. Nakaji’s best friend Billy Davis stays by his side through it all, as if they were brothers. This all changes when the Japanese bomb Pearl Harbor, making life even more difficult for the local Japanese population.

The movie tells the story of wartime Hawaii through a personal point of view, which makes it much more enjoyable than a history documentary. The movie depicts the hardships the Japanese Americans encountered after the bombing. Under The Blood-Red Sun is a reminder of the sacrifices these families made to achieve the comfortable world we live in today.

[one_third]The movie tells the story of wartime Hawaii through a personal point of view, which makes it much more enjoyable than a history documentary.[/one_third]

Many of the characters in the movie prove to be courageous in their own way. Nakaji strives to be the better person and makes many sacrifices for his family. Characters like Billy Davis overlook racial prejudices and remain true to their morals. Under The Blood-Red Sun is the story of people who chose right and honorable paths, regardless their circumstances.

According to Savage, he first became interested in the book 10 years ago, when producer Dana Hankins introduced it to him. Savage has won many awards locally for his short films and works with New Hope Oahu church as the Director of Media.

“Really, the only reason I agreed to work on this movie was because of the many positive life lessons [in it]: courage, honor, loyalty, standing up to bullies, and fighting against racial prejudice,” says Savage. “I’m half Japanese and half haole, and I felt like I could tell this story accurately from a local perspective.”

Savage worked with a mostly local cast and crew, including Under The Blood-Red Sun’s author Graham Salisbury, who contributed as the screenwriter. Salisbury is the author of many other award winning books, such as Night of the Howling Dogs and Eyes of the Emperor.

Actor Kyler Sakamoto, who plays Nakaji, says, “I read the book when I was in the sixth grade. So when I heard that they were going to make a movie on this book, it was like a dream come true to even have the opportunity to audition for the role. It was like I had prepared for a very long time to play a dream role like this one.” Sakamoto’s background is in musical theater, dance, and acting.

[one_third]Under The Blood-Red Sun is a reminder of the sacrifices these families made to achieve the comfortable world we live in today.[/one_third]

Also in the cast is 16-year-old Bryce Moore who plays Keet Wilson. “As an actor, I believe this experience was amazing,” says Moore. “It was a small enough production that everyone got to know each other, but big enough that it will be noticed.” Unlike the character he plays, Moore has a lot of respect for his peers. “[The cast] is all excellent actors and I would feel honored to work with them again. As for [Savage], I really got to know him and have come to regard him as family,” he says.

In the film’s private premiere at the Hawaii Theater Center on September 13, over 300 cast and crew members along with their guests watched Under The Blood-Red Sun on the big screen. “[Watching it] was a mixture of anxiety, nervousness, relief, and excitement,” says Savage. “It was so rewarding when I finally realized that people actually liked it!”

Sakamoto’s mother, Kalene Sakamoto, says, “It was so amazing watching Kyler do his craft. I saw a side of my son I’ve never seen before…I am very proud of Kyler as he remained positive and excited about being on set everyday.”

I’m glad that I can now enjoy this inspiring story through a movie as well as in a book. The movie can be purchased from the film’s website and I highly recommend it.  The movie will not be released to the theaters.

Savage describes Under The Blood-Red Sun as “a charming and heart-warming story of people rising above the challenges set before them. It is about courage, loyalty, and friendship, under seemingly insurmountable odds.” I can’t help but agree with every word.

Music Review: “Made In the AM” by One Direction